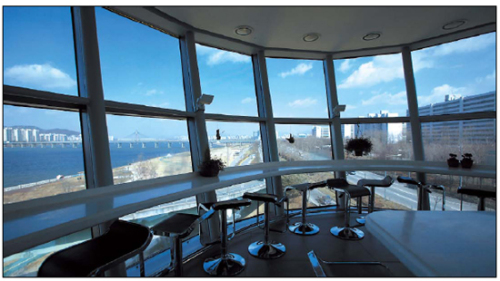 This is the 72nd in a series of articles highlighting tourism spots in Seoul. The guide for planning weekend trips in the capital city will help readers rediscover Seoul. Ed.

At 6 O’clock in the evening, the sun slowly sinks below the horizon. Along both sides of the Han River, riverside highways light up with street lights. Thin clouds settle along the horizon of the river and the sunset tints the horizon.
At such a moment, Cafe Sunset at Dongjak Bridge is covered with a blanket of silence. A couple looking at each other through loving eyes and feeding each other ice cream turn their eyes towards the river. A lady reading a book over a cup of coffee stops turning the pages. The slow and calm flow of the Han River, the dancing headlights of cars, and the riverside buildings lighting up as it gets dark, these scenes gives us quiet moments to reflect on our lives in Seoul.
There are many places to get a good night view of Seoul. However, the cafe and observatories located at the bridges are among the best. There are 24 bridges over the Han River and 6 among them Gwangjin Bridge, Jamsil Bridge, Hannam Bridge, Dongjak Bridge, Hangang Bridge and Yanghwa Bridge provide striking views of the river.
At Cafe Sunset on Dongjak Bridge, the river flows right underneath the observatory deck to give you the feeling of being onboard a cruise ship. A section of Riverview 8th Avenue on Dongjak Bridge has a glass floor. The floor here is covered with red tiles and the chairs are giant dice. The interior design is bright and cheerful, which makes the cafe popular with young couples. Cafe Aritaum Yanghwa and Seonyu on Yanghwa Bridge are shaped like folded paper cranes. The elevators are located in the wings of the crane. Each cafe-slash-observatory boasts a unique feature which you can fully enjoy when you take in the sunset and the night view.

The Han River’s 494 km cross-country trip
The source of the Han River is in Geomnyeongso, located at the foot of Geumdae Mountain, Changjuk-dong, Taebaek-si, Gangwon Province. It flows through Yeongwol, Gangwon Province, where it meets the Pyeongchang River and passes Danyang in North Chungcheong Province. The river takes a rest at Chungjuho Lake and then continues to flow to Yeoju, Gyeonggi-do. At Dumulmeo-ri, Yangpyeong, it joins the Bukhan River, which flows from Okbalbong in Geumgang-gun, North Korea. From here, it passes through Seoul, meets the Imjin River and heads toward the West Sea. From the source to the lower stream, the Han River stretches about 494 km tracing the waistline of the Korean Peninsula as it goes. The river is joined by 920 tributaries from source to sea. It is a river that holds not only water but also the joys and sorrows of Korean people who have depended on these countless streams. Thus, the Hangang is like a mother to Korean people.
The Hangang (River) has been called many different names according to the times. During the period of the Three States, it was called “Daesu” (belt water) meaning it crossed the middle of the Korean Peninsula like a belt. Goguryeo called it “Arisu.” It’s current name comes from its name during the Baekje Dynasty (B.C. 18-A.D. 660), “Hansu.”

Riverview 8th Avenue
at Gwangjin Bridge
Among the nine bridge cafes, the cafe and observatory deck at Gwangjin Bridge are the only places located beneath the bridge. As you walk along the pedestrian bridge, a sign will guide you to a staircase down to the cafe. Gwangjin Bridge is also famous as a location for the recent drama “IRIS.” Surrounded by glass walls, the deck allows for a clear view of the river. Through the glass floor, you can look at the pillars of the Gwangjin Bridge as well as the river. During April, the “7080 Family Concert” will take place every Sunday. The concert is free, and the tickets are available on the internet (www.riverview8.co.kr).
How to get there: after leaving Exit No. 2 of Gwangnaru Station (Line 5), cross the road, turn left and walk 300 m. Turn right at the Gwangjin Youth Training Center and proceed for another 100 m to reach the entrance of Gwangnaru Pedestrian Bridge. Go straight for about 500 m to get to Riverview 8th Avenue.

Riverview Bom
on Jamsil Bridge
When the elevator doors open, numerous pots of flowers welcome you. From every corner of the cafe on the walls and tables, the fresh scent of flowers tickles your nose. On the 2nd floor, you get a clear view of the cars running up to Jamsil Bridge from the riverside highway and the Olympic Bridge. This cafe provides a relaxing and calm space to those who dream of traveling or love reading during the day. The cafe serves beverages and simple snacks.
Upon application, you can also participate in the eco-learning experience program provided by the Seoul Foundation of Women and Family.
How to get there: 1 km walk toward Jamsil Bridge from exit No. 7 at Jamsil Subway Station.
Cafe Rainbow
on Hannam Bridge
CafeRainbow is a bicycle-themed cafe located at Hannam Bridge, between the Banpo and Dongho bridges. If you depart from the park near Yanghwa Bridge or from the park near Jamsil Bridge on the other side, around the mid-point you may feel like taking a rest here. The cafe is decorated with paintings of bicycles and other decorations. On the first floor, you can park your bicycle in the bicycle racks before going up to the cafe.
Popular menu items at the Cafe Rainbow include makgeolli and soju cocktails.
How to get there: from Gangnam, take bus No. 470, 420, or 144 heading north.

Cafe Cloud and Cafe Sunset on Dongjak Bridge
These twin cafes have the highest observation decks. The 5th floor of each cafe is an outdoor deck, which provides a panoramic view of the river. Since it is one of the best places to view the sparkling night view of the Han River, many photographers visit these cafes.
Cafe Sunset is particularly famous for its panoramic view of the west. Since the river flows underneath the cafe, it feels like being on a cruise ship and as the cafe also provides meals, such as pork cutlets, you can enjoy dining and the night view at the same time. Cafe Cloud faces the Moonlight Rainbow Fountain of Banpo Bridge. Looking at the bridge fountain changing colors is fun in itself.
One of the best features of these two cafes, however, is the parking on the bridge. They are the easiest bridge cafes to access.
How to get there: take bus No. 502 outside Dongjak Subway Station Exit No. 1 and get off at the Jeonmangdae stop.

Cafe Nodeul and Cafe Rio on Hangang Bridge
Cafe Nodeul and Cafe Rio look like lighthouses. The eye catching interior decorations of these cafes make them a hit with young people. Cafe Nodeul is decorated with red and white dice-shaped chairs and a red floor. Star-shaped lighting fixtures change color to create a fantastic atmosphere. The chic decoration makes Cafe Nodeul a good place for a special date. Cafe Nodeul offers various imported beers from Germany, the Netherlands, and Belgium.
How to get there: 12-minute walk from Exit No. 4 of Ichon Subway Station.

Cafe Aritaum Yanghwa and Seonyu have a rather simple and mild mannered look about them. Next to these are Seonyudo Park and Bukak Mountain embracing Seoul like a folding screen as seen through the windows of the cafs. Unlike other bridge cafs, which have 3 to 5 floors, the twin Aritaum cafes are single floor buildings. They do not have a distinguished look but try not to clash with their surroundings.
Other cafes have glass walls allowing for a panoramic view of the river, but Cafe Aritaum Yanghwa has circle-shape windows set in red brick walls. The soft lighting is also comforting.
Aritaum Yanghwa and Seonyu are decorated in oriental and Western styles, respectively. The wooden lattice windows of Cafe Yanghwa lend it an oriental atmosphere. The urban scenery viewed through the windows of Cafe Yanghwa is composed of the National Assembly Building and subway trains crossing the river, while Cafe Seonyu gives you views of Seonyudo Park.
However, there is one shortcoming of the Aritaum Cafes. Since they are located right on the bridge, you can feel the vibrations and noise of the cars passing by unlike the other bridge cafes located above or underneath their respective bridges. If you are sensitive to vibration and noise, these cafes may not be the best place for you.
How to get there: Take bus No. 5712, 602 or 604 from Exit No. 5 of Hapjeong Subway Station. Get off at the Jeonmangdae stop.