The low-molecule Reprogramming Stimulating Compound 133, or RSC133, adds to the list of non-viral vectors that are crucial to advancing the biotechnology and production of iPS cells.

Dr. Cho Yee-sook and Dr. Lee Jung-woon of the Korea Research Institute of Bioscience & Biotechnology led a team of researchers for this latest discovery that was published in Angewandte Chemie International journal early this month. 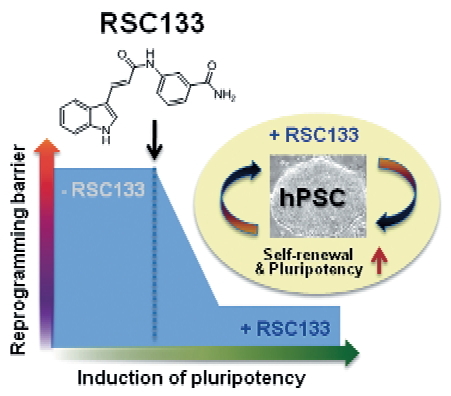 It said that the compound derivative acts as the “booster of pluripotency,” and it “potently improves the reprogramming of human somatic cells into a pluripotent state and aids the growth and maintenance of human pluripotent stem cells.”

Pluripotent stem cells, like embryonic stem cells, can be turned into any type of cell in the body.

The biotechnology of iPS cells has been gaining recognition since Kyoto University professor Shinya Yamanaka discovered that they could be created from mature cells. He won the Nobel Prize in Medicine last month for his research.

The reprogramming of adult cells to their immature state has the potential uses for patient-specific cures, such as providing cell replacements.

The iPS cell technology also has the advantage of being free from the ethical concerns that previously affected stem cell research using embryos, which opponents and critics deemed as early human life.

However, the downside of iPS cell generation is that it has caused side effects such as cancer and mutations during clinical applications as it relies something known as a viral-vector system for adult cell reprogramming.

Yamanaka noted to the media that scientists need to carefully see that cells do not cause “any severe side effects in patients after transfer.”

This is the reason scientists are keen on developing non-viral methods such as molecular compounds, nano materials and alternative biological vectors to further the advance of iPS cell study.

The KRIBB team said that it will further its discovery by applying the compound derivative in clinical trials to show its potential as a safe, non-viral material that can hopefully be used to develop stem cell-based therapies.

RSC133 could be applied to “optimize” iPS cells that can differentiate into nerve cells and heart muscle cells, it added.

Cho said that this latest research development has opened new possibility in improving the efficiency of reprogramming and iPS technologies, and developing patient-specific treatments.

KRIBB’s research was supported by Korea’s Ministry of Education, Science and Technology, the National Research Foundation and the Korea Research Council of Fundamental Science & Technology.