Experts caution Seoul can be left out in the cold over N.K. issues 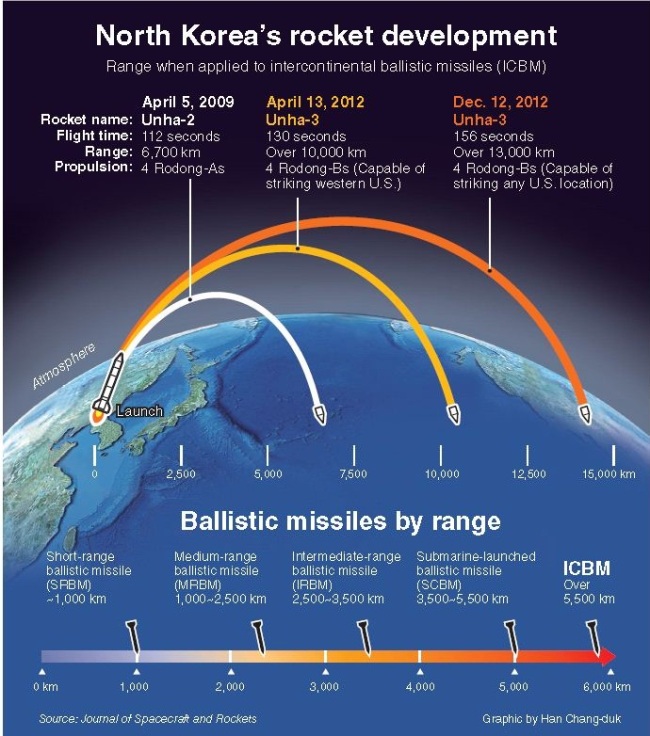 To cope with this, Seoul needs to map out a smart strategy through multilateral diplomacy, they said. It should also remain mindful that Pyongyang will continue to shun Seoul as a negotiating partner and seek greater-scale deals only with nuclear-power states such as the U.S. and China.

“The North will be in a psychologically superior position to the South with its refined nuclear military capability,” said Hong Hyun-ik, a senior fellow at the think tank Sejong Institute

“The concern is the North would claim to represent Korea now and step up its strategy to talk directly with Washington while sidelining Seoul. China would back the bilateral talks with the U.S. Seoul should be mindful that it could be left out in the cold.”

Pyongyang on Wednesday came back into the global limelight as it showed off considerable progress in its decades-long development of long-range missiles with its successful rocket launch.

With the three-stage rocket with an estimated range of more than 10,000 km, the communist state now has delivery vehicles that could reach U.S. military targets in Japan, Guam, Hawaii and the American continent.

In addition to the delivery capability, the North is expected to focus on technologies to miniaturize nuclear warheads and produce a payload that can withstand temperatures of more than 6,000 degrees Celsius during its reentry into the atmosphere.

“The North is believed to have enough fissile material for a dozen or more nuclear weapons, and it could reveal a new ability to fashion a miniaturized warhead anytime in the next year or so,” said Patrick Cronin, senior director of the Asia Program at the Center for a New American in a piece carried by CNN.

To refine its miniaturization technology, the likelihood of the North carrying out a third nuclear test is high, experts pointed out, adding that the test may be based on highly enriched uranium rather than plutonium, which is hard to obtain.

Seoul’s Defense Minister Kim Kwan-jin said Wednesday during a parliamentary session, “Considerable progress has been made in the North’s preparation for the third nuclear test. An additional test is possible based on the North’s judgment of political situations.”

Pyongyang’s previous nuclear tests have followed long-range rocket launches. It fired a rocket in July 2006 and conducted the first nuclear test in October. Its second nuclear test was carried out in May 2009 after launching a rocket the previous month.

Amid Pyongyang’s efforts to bolster what it calls “nuclear deterrence,” there are concerns that Seoul’s diplomatic influence could wane in international denuclearization negotiations as the North continues to shun Seoul, which is sticking to a strict reciprocal policy.

Seoul’s ties with Pyongyang have deteriorated under the Lee Myung-bak administration, which sought a principled reciprocal policy linking aid to the impoverished North to denuclearization.

Observers have said that there should be a more flexible, sophisticated policy under the new Seoul government, which takes into account both domestic and international politics concerning North Korea issues.

“Seoul should step up efforts to jointly respond to North Korean issues with the international community given that we are living under nuclear blackmail,” said Han Yong-sup, vice president of Korea National Defense University.

“We need to continuously update our nuclear deterrence strategy and public awareness of North Korea as a real threat should also be enhanced.”

The question remains, however, whether the North can succeed in gaining the India-like de-facto nuclear power status.

Gweong Yong-lib, professor at Kyungsung University, remains skeptical about the U.S. and other members of the international community recognizing the North as a nuclear power.

“There is not yet any sense of urgency enough for the U.S. to have to recognize the North as a nuclear power state, even if the North possesses real operational nuclear weapons,” he said.

He added that Washington’s domestic political situation may be one of the crucial variables concerning its policy toward the North.

“As the White House is now haggling with the Republicans over financial issues and the Republicans have a bad perception of the North, it would be difficult to be more active in negotiations with Pyongyang given the domestic political burden,” he said.