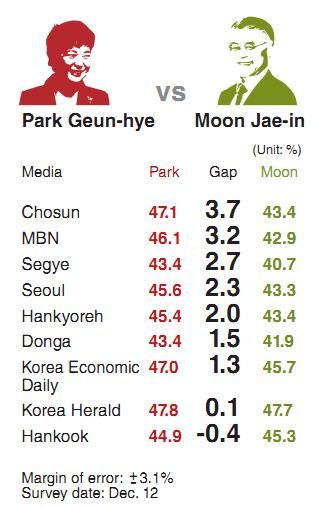 The opinion polls of presidential candidates conducted on Dec. 12, the last day that they can be publicly announced, show that Moon Jae-in of the liberal Democratic United Party has significantly caught up with Park Geun-hye of the conservative Saenuri Party.

All surveys were conducted on Dec. 12 and had the same margin of error of plus or minus 3.1 percentage points.

The gap between the two was wider than the margin of error in only one poll, commissioned by the Chosun Ilbo.

Election law prohibits public opinion polls of candidates from being announced to the public beginning six days prior to election in order to prevent opinion polls from unduly influencing voters’ choice.