Search for dark matter comes up empty so far 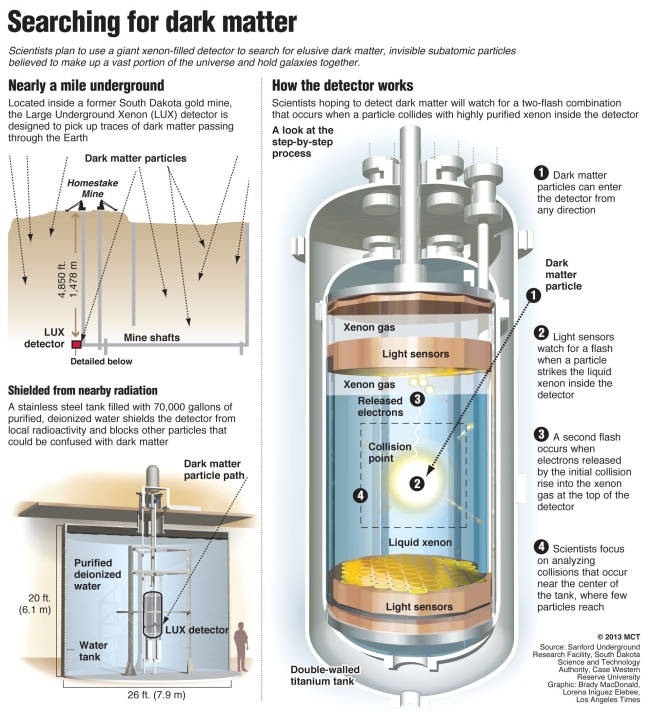 LEAD, South Dakota (AP) ― Nearly a mile underground in an abandoned gold mine, one of the most important quests in physics has so far come up empty in the search for the elusive substance known as dark matter, scientists announced Wednesday.

But physicists on the project were upbeat, saying they had developed a new, more sensitive method of searching for the mysterious material that has mass but cannot be seen. They planned to keep looking.

“This is just the opening salvo,” said Richard Gaitskell of Brown University, a scientist working on the Large Underground Xenon experiment, or LUX, the most advanced Earth-based search for dark matter. A detector attached to the International Space Station has so far failed to find any dark matter either.

The researchers released their initial findings Wednesday after the experiment’s first few months at the Sanford Underground Research Facility, which was built in the former Homestake gold mine in South Dakota’s Black Hills.

With the earth helping screen out background radiation, scientists tried to trap dark matter, which they hoped would be revealed in the form of weakly interacting massive particles, nicknamed WIMPS. The search, using the most sensitive equipment in the world, is looking for the light fingerprint of a WIMP bouncing off an atomic nucleus of xenon cooled to minus 150 degrees.

But nothing has been found. The team will continue looking for another year and plans to build a more sensitive experiment on the site, using a bigger tank of xenon. Scientists involved in the experiment said it had eliminated some theoretical candidates for dark matter, and there are many more theoretical models to search for.

“The short story is that we didn’t see dark matter interacting, but we had the most sensitive search for dark matter ever performed in the world,” said Daniel McKinsey, a physicist at Yale University.

The lab, in a bright, clean space at the end of an old mining tunnel filled with pipes and electric cables, is reached by a 10-minute ride in an elevator that once carried miners. Gaitskell and McKinsey said the experiment has far less radiation interference from cosmic rays than any other dark-matter lab.