By Yoon Min-sik
Published : Aug 27, 2015 - 21:05       Updated : Aug 27, 2015 - 21:05
The number of South Korean undergraduate students in four-year colleges and universities decreased for the first time since the government started tallying educational statistics, officials said Thursday, as the country continued to see a gradual decline in overall students.

About 3.61 million students were enrolled in higher education institutes as of 2015, 2.1 million of whom were undergraduates, according to the Education Ministry. The number of undergraduates marked a 0.8 percent fall from 2014.

The total number of students in tertiary education has been on the decline since peaking at 3.73 million in 2011. 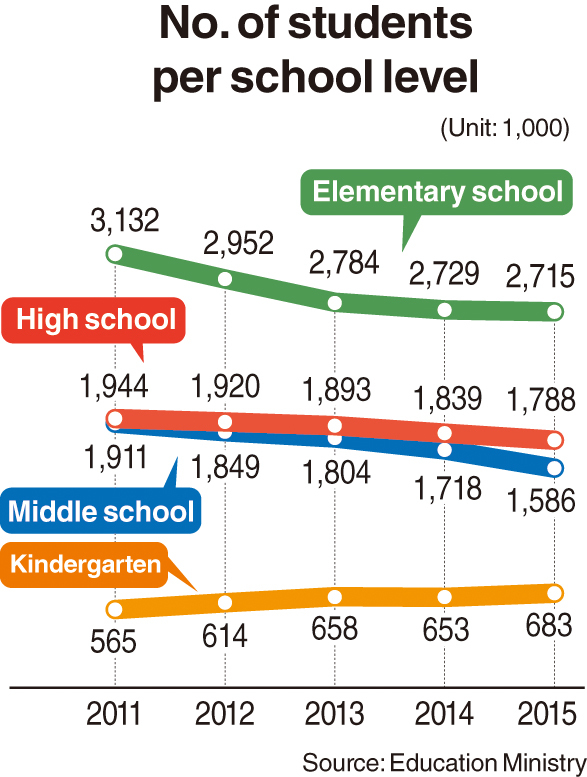 Ministry officials said their consistent efforts to cut the number of students at colleges and universities appear to be paying off. The government has been pushing to decrease the number of undergraduates as a way to restructure crowded and underperforming colleges. As Korea’s population continues to dwindle, the overall number of students is also expected to continue to decline.

There are currently 6.81 million students at primary and secondary schools, which is a little more than two-thirds of 10 million students Korea had in 1960. If this trend continues, there will be 160,000 more college student openings than high school graduates by 2023.

The Education Ministry is conducting a nationwide college evaluation, the results of which will be announced next Monday, and institutes that get poor grades will be pressured to cut their student quota. Those unwilling to comply will be cut off from government subsidies.

The ministry is pushing to cut about 40,000 student openings at colleges by 2017, and 160,000 by 2023, which implies that the number of students in higher education is likely to keep decreasing.

Students of Vietnamese descent accounted for 20.9 percent of multicultural students, followed by Chinese and Japanese, respectively, at 20.8 percent and 15.9 percent.

Since taking office, Education Minister Hwang Woo-yea has stressed that hosting more foreign students was the best way for local colleges to compensate for the declining number of local students.

In contrast to the student headcount, the number of teachers saw a slight increase of 0.2 percent from the year before. About 69.7 percent of teachers in primary and secondary education were women, while women accounted for 24.4 percent of educators in higher education.