[New Books] Essays on the endings of well-known writers 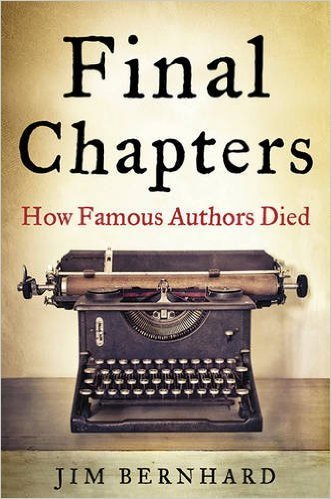 A person’s life is always more important than his or her death -- but no one reads an obituary or biography without wanting to know how the subject died. British-educated Texas writer Jim Bernhard gives a respectful nod to the understandable fascination most of us have with death in this collection of essays about the ends authors have come to.

To his credit, he includes in each essay some of what the person in question said or wrote about death, giving us insight into his or her personal philosophies and fears.

Some of his subjects: Aeschylus, killed by a turtle dropped on his head by a vulture; Thomas Aquinas, whose body was buried in France -- except for his right arm, buried in Rome, and his left arm, interred in Naples (Bernhard writes: “Canonized in 1323, St. Thomas now rests in pieces”); Sir Francis Bacon, possibly poisoned by raw chicken he was experimenting with preserving; Jane Austen, dead at 41 of Addison’s disease, or maybe it was lymphoma, or possibly bovine tuberculosis; Margaret Fuller, drowned in a shipwreck with her husband and son; Thomas Hardy, whose ashes are in Westminster Abbey but whose excised heart, meant to be buried next to his first wife in Dorset village, was possibly eaten by his cat; Sherwood Anderson, who died of sepsis after he swallowed a martini toothpick, and Thomas Merton, electrocuted by a fan after taking a shower.

The book is an often morbid but sometimes merry reminder that all flesh is grass, no matter how talented or rich or famous the bones it cloaks. (TNS)