‘The Never Ending Wars’: A scathing account of U.S. military failure and ineptitude

By Korea Herald
Published : Jun 15, 2016 - 14:33       Updated : Jun 15, 2016 - 14:33
Andrew Bacevich studied at West Point and Princeton University and served in the U.S. Army for 22 years. He is well qualified to bring the reader a broad, informed perspective on the subject he addresses -- the U.S. military’s role in multiple presidents' largely unsuccessful efforts to bring a widely varied, very different region under American hegemony. “America’s War for the Greater Middle East: A Military History” accomplishes this feat.

The American military, apart from a series of self-hagiographic memoirs attempting to cash in on fame that drains away rapidly, is not especially adept at writing about and making comprehensible to the rest of us what it is that it does, or what it did, while on active duty in Afghanistan, Iraq or another venue of squandered American wealth and lives. Bacevich has enough experience, accompanied by some distance, perspective and objectivity, to walk us through in an informed way the past 35 years of our splashing around in the Middle East.

It is important for perspective in examining that period to understand that the only wars America has won in that period were the invasion of Grenada in 1983 and of Panama in 1989. The Gulf War to kick Iraq out of Kuwait, which it had invaded, was very much an international team effort, led by the United States but paid for and manned by forces from some 30 other nations. Never mind trying to figure out how much money we have spent on our armed forces in that period, nor the number of our veterans living in this country with the tragic results of their service.

Bacevich puts our repeated failures -- in Afghanistan, Bosnia-Herzegovina, Iraq, Kosovo, Lebanon, Libya, Somalia, Syria and Yemen -- down to “a gap between military muscle and political acuity.” He cites chapter and verse, at length, in each chosen battleground, writing about events and people in a very lively personal way. He doesn't spare individuals. He describes U.S. Central Command leader, Gen. Tommy Franks, as “a thin-skinned lout.” Former Secretary of State Madeleine Albright is “bellicose.” He says that, by 2004, for then President George W. Bush, “winning a second term eclipsed all other presidential priorities.” 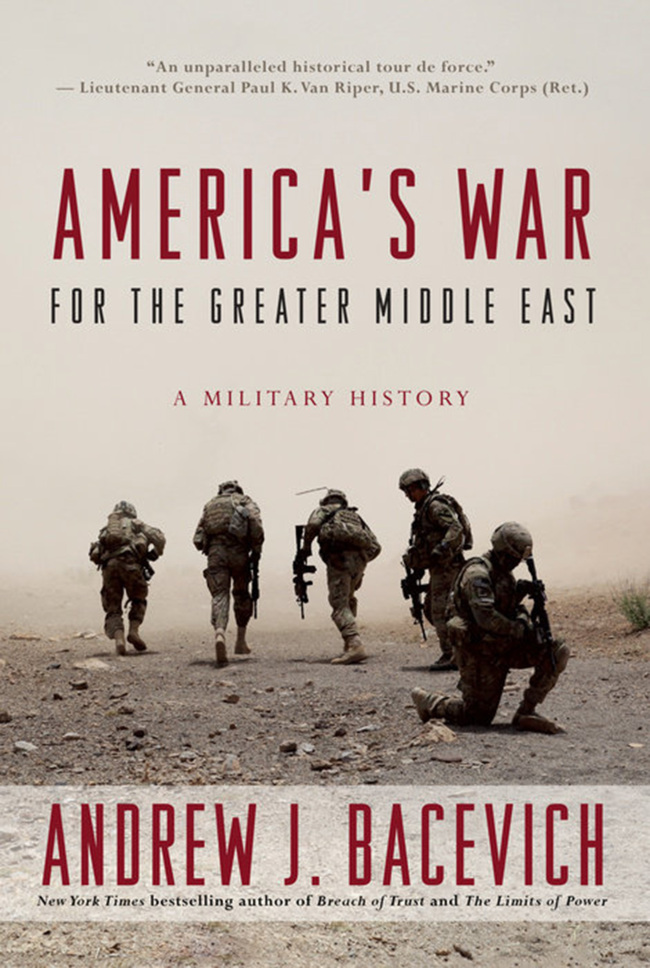 He runs through, describes and analyzes the results of the series of U.S. military theologies that prevailed across the Iraq, Afghanistan and other wars of the period. “America’s War for the Greater Middle East” was, he says, a product of President Jimmy Carter's administration. “America Everywhere” replaced “America First” about 1991. Then, in the military, there was the Revolution in Military Affairs, or RMA. Then came a passion for counterinsurgency, or COIN. In the meantime, there was little tendency to learn from what had gone before: “In forgetting, they learned nothing,” he says. Much theory, rhetoric and policy was “unalloyed drivel,” he says.

U.S. leaders consistently “substantially overstated the threat” to the United States by this or that external force in quest of resources. The U.S. possessed “excess military capacity” and tended to favor it over diplomacy, commerce and other means, to try to achieve its goals.

Bacevich does not hesitate to cite the role of the American military-industrial complex in our political and military posture. “The pursuit of policy objectives was merging with the pursuit of profit,” he notes on American involvement in Bosnia-Herzegovina, Kosovo and other Balkan ventures. In Iraq, the government in Washington did not hesitate to “funnel money to the military-industrial complex,” selling the Iraqis in one period some $14 billion in military equipment, which they then abandoned to al-Qaida and other enemies.

President Barack Obama, he says, only expanded the War for the Greater Middle East, “in spite of his pledges to end them. Some of the military saw Obama as "green as grass ... without personal military experience," thus, easily bamboozled. The national security apparatus, in the meantime, remained collectively determined to protect its status and prerogatives.

Whether one agrees with Bacevich’s overall conclusions, his observations are sharp and provoke very useful thought. They provide an irreplaceable backstory to what is more generally known of U.S. and international political developments of the past few decades. (Tribune Content Agency)