According to Statistics Korea, the number of self-employed individuals in the country amounted to 5.63 million in the final quarter of last year, up 140,000 from a year earlier. It marked the largest increase in more than four years.

Over the cited period, the number of employees in the manufacturing sector decreased by 115,000. The manufacturing workforce shrank for the sixth consecutive month in December.

These figures point to the unwelcome trend that a growing number of Koreans are being compelled to start their own businesses, whether they are laid-off, retired workers unprepared for the later part of their lives or young job seekers frustrated with the tight labor market.

Experts raise concerns about the negative impact an increase in businesses that barely stay afloat would have on the country’s already faltering economy.

Self-employed businesses accounted for 25.9 percent of Korea’s employment in 2015, far above the 16.2 percent average for 34 members of the Organization for Economic Cooperation and Development. 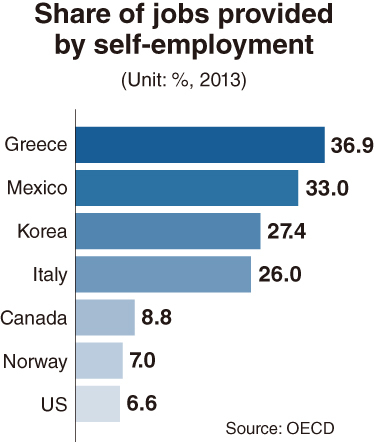 Competition has forced many self-employed people to close their businesses within just a few years of opening restaurants, accommodations, repair shops and mom and pop stores.

According to data from the National Tax Service, nearly 23 percent of restaurants that opened in 2015 were shut down within a year. Throughout 2015, 1.06 million individuals started a self-employed business while 739,000 others closed their businesses.

One in 5 self-employed businesses earned less than 1 million won ($870) per month, and more than half saw their annual sales fall below 46 million won.

Many self-employed people saddled with heavy debt are facing the increasing possibility of going bankrupt as interest rates continue to rise amid a prolonged economic slump.

According to figures from the Bank of Korea, outstanding loans to self-employed businesses were estimated at 464.5 trillion won as of September. A recent survey by the Financial Supervisory Service showed the figure surpassing 600 trillion won.

A BOK report released last month suggested a 0.1 percentage point rise in interest rates heightens the possibility of a self-employed business closing within a year by 10.6 percent for the dining and lodging sector, 7.5 percent for repair and other individual services and 7 percent for wholesale and retail.

The central bank has held its benchmark interest rate at a record low of 1.25 percent since June. But rates applied by commercial banks to lending to small businesses and mortgage loans rose from 3.53 percent and 2.66 percent in July to 3.77 percent and 3.13 percent in December, respectively. The increases seem to reflect expectations that the BOK will move to raise rates as the US Federal Reserve is poised to continuously hike rates in the years to come.

The rising debt burden on self-employed businesses is coupled with a decline in consumption spending.

According to a government report released last week, retail sales fell 1.2 percent from a month earlier in December. The consumer sentiment index for January came to 93.3, the lowest since March 2009 when it stood at 75 in the aftermath of the global financial crisis.

Experts note a comprehensive approach is needed to cope with an increase in the closure of self-employed businesses, which would exacerbate the unemployment problem and hurt the stability of the local banking sector.

It is necessary to replace existing loans to self-employed people with those carrying lower interest rates, offer detailed information on self-employed businesses operating in certain areas and promote regional economies, they say.

But the continuous decrease in jobs, particularly in the manufacturing sector, is set to limit efforts to reduce the flow of people into the overcrowded self-employment sector.

More fundamentally, the recent employment trend in the country results from an economic growth not accompanied by a proportionate increase in quality jobs and household income, experts say.

In a report presented to a conference of the Korean Economic Association last week, Chang Ha-sung, a professor of business administration at Korea University, indicated the aggregate growth of Korea’s gross domestic product reached 249 percent from 1990 through 2015, while the average household income and the number of employees rose by 90.5 percent and 43.4 percent, respectively, over the cited period.

Households’ ratio of gross national income shrank from 70 percent to 62 percent during the same period as the corresponding figures for corporations and the government climbed from 17 percent and 13 percent to 24.6 percent and 15.4 percent, respectively, according to BOK data.

Chang attributed Korea’s growth without an increase in employment mainly to the country’s adherence to an industrial structure focusing on manufacturing, which has shed jobs in accordance with automation and the off-shoring of production.

Manufacturers’ share of Korea’s GDP stood at 30.2 percent in 2014, the highest among OECD member states and the second most among G-20 major economies, following China at 35.9 percent.

Chang said it was necessary to increase jobs in service industries by encouraging corporations to expand investment through deregulation.

Other economists also recommended measures should be taken to nurture more competitive small and midsized companies and innovative startups, which would help increase employment.