By Korea Herald
Published : Feb 16, 2017 - 13:59       Updated : Feb 16, 2017 - 16:32
South Korea’s economic freedom rose to rank 23rd in the world this year, but its structural economic reform has not seen much progress due to continuing political instability and uncertainty, a US report said Thursday.

According to the 2017 Index of Economic Freedom report by the Heritage Foundation, South Korea’s ranking went up four notches from last year, while North Korea still remained at the bottom of 180 countries.

South Korea was among the second-tier “mostly free” nations after the top five “free” countries -- Hong Kong, Switzerland, Singapore, Australia and New Zealand in terms of the entrepreneurial environment of their economies.

“Despite its relatively well-maintained macroeconomic stability and openness to global commerce, the economy has been flagging, with momentum for growth increasingly subdued in the absence of decisive policy reforms to improve overall efficiency and flexibility,” the report said on South Korea.

South Korea’s improved ranking in economic freedom was attributed to its well-institutionalized rule of law, regulatory efficiency and market openness.

However, government integrity is at stake due to high-profile corruption scandals, which “eroded the public’s trust and confidence in government,” the report said. 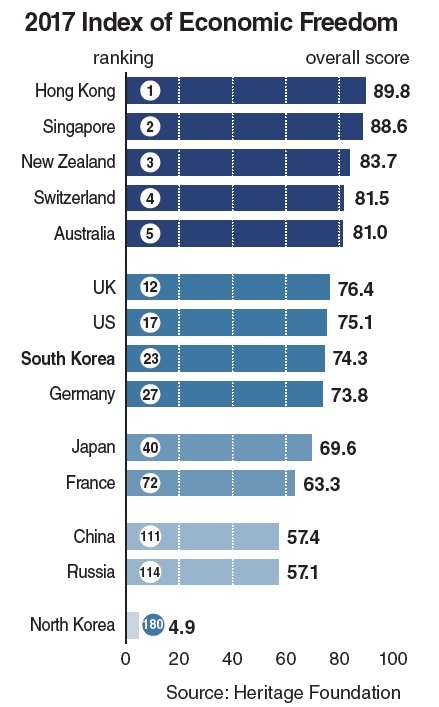 As for North Korea, which ranked last in the list overall and was also among “repressed” nations, the report said the communist state is still “unreformed and closed,” as the despotic regime of Kim Jong-un resists economic reform.

Japan’s ranking in economic freedom plummeted to 40th from 22nd last year, due to its nontariff barriers which drive up local prices and dampen overall efficiency, the report noted.

Japan lags behind other countries in seeking bilateral trade partly because it does not tend to expose certain of its industries to global competition, it said.

US ranked 17th, a historic low, due to large budget deficits and a high level of public debt.