Under a five-year fiscal management scheme, expenditure on social overhead capital is set to be reduced by an annual average of 6 percent from 26.1 trillion won ($22.9 billion) in 2015 to 18.5 trillion won in 2020.

Financial authorities say Korea has sufficient SOC stock and that the plan follows the trend seen in other advanced countries where less fiscal weight is put on infrastructure projects as national income grows.

However, experts say judgment on the sufficiency of a country’s SOC stock can differ depending on what standards are used for international comparison.

For example, Korea ranks high among Group of 20 major economies in terms of the combined length of roads per territory but its ranking plummets to near the bottom in per capita length.

“If evaluated from the viewpoint of user convenience, it is far more difficult to say our SOC stock is adequate,” said Lee Sang-ho, head of the Construction & Economy Research Institute of Korea.

In 2015, construction investment accounted for 14.6 percent of Korea’s gross domestic product, compared with the 12 percent average for the 34-member Organization for Economic Cooperation and Development.

Public spending on infrastructure took up a mere 3 percent of GDP, while the proportion of private builders’ investments, most of them in housing construction, reached 11.6 percent.

Reflecting a decrease in fiscal expenditure on infrastructure, orders for local civil engineering projects fell by 16 percent from a year earlier to 38.2 trillion won last year. By contrast, housing and other construction orders surged by 12.6 percent to 126.7 trillion won.

Housing construction can no longer be expected to help shore up the economy as snowballing household debt and tighter rules on mortgage loans have been dampening the local housing market.

There will be a need for infrastructure provision to enhance the efficiency of the economy and be better prepared for a new industrial revolution.

The planned cut in infrastructure investment also turns a blind eye to the need to reinforce and refurbish aging facilities across the country.

In a seminar earlier this month, Park Soo-jin, a researcher at the CERIK, noted demand for SOC improvement would rise sharply in the coming years as the endurance period of decadeslong infrastructure facilities comes to an end.

He said the fiscal management plan could cause up to 47 trillion won of shortage in SOC spending over the next five years.

According to his estimates, the reinvestment needed to be made in existing infrastructure facilities would amount to 53.4 trillion won in the period between 2016 and 2025 and 118.2 trillion won in 2026-2035. Over 10 years after that, the amount was projected to further rise to 300.3 trillion won. 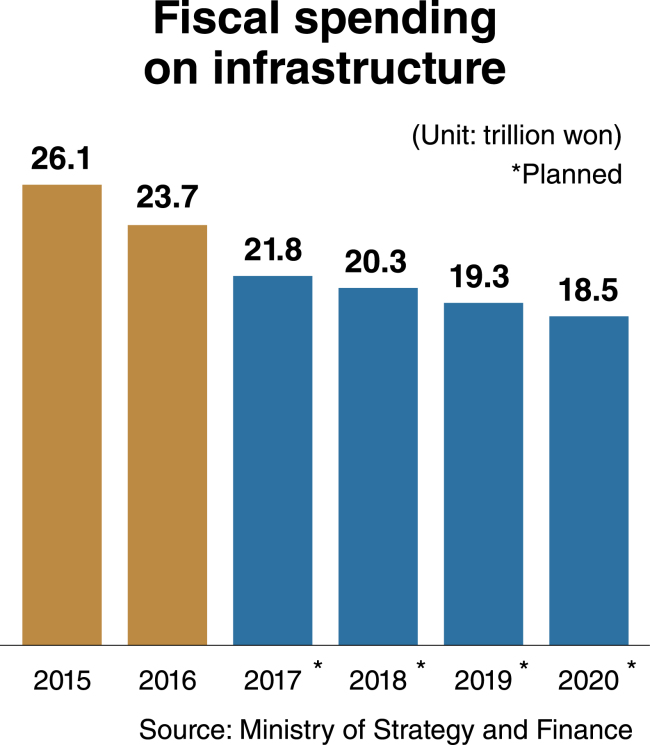 “It is a misunderstanding that Korea can reduce infrastructure investment because its SOC stock is adequate,” Park said, adding the infrastructure spending plan should be revised to take into account the demand for reinvestment.

The US has suffered from a hefty burden caused by a long period of underinvestment in infrastructure.

In the 1990s, the US began sharply reducing the ratio of infrastructure spending to GDP. As a result, the maintenance cost surpassed expenditure on building and improving SOC facilities.

In 2015, the US expended $235 billion, or 56.5 percent of its total SOC budget, maintaining existing facilities and spent the remainder on new projects.

According to the latest estimate by the American Society of Civil Engineers, it will cost $3.6 trillion by 2020 to upgrade US infrastructure facilities, which it graded D+.

It is against this background that President Donald Trump pledged to spend $1 trillion on infrastructure over the next 10 years. Japan and European Union members have also pushed to increase infrastructure investments as part of expansionary fiscal policy.

Experts here note Korea needs to implement a new strategy for SOC investment, which could both give a short-term boost to the economy and help enhance the country’s long-term growth potential.

Lee Sang-geon, a researcher at the Korea Research Institute for Human Settlements, said the focus of SOC investment should shift to quality, refurbishment and safety from quantity, construction and profitability.