Korea on alert over currency swap deal with China

By Korea Herald
Published : Mar 13, 2017 - 16:42       Updated : Mar 14, 2017 - 13:43
South Korea’s financial officials are worried that China will refuse to extend a bilateral currency swap deal set to expire in October, in yet another retaliatory move against Seoul’s hosting of a US missile defense system.

The Seoul-Beijing swap line worth $56 billion accounts for nearly half of the total amount of Korea’s currency arrangements with other countries.
Officials here say Finance Minister Yoo Il-ho will call for separating economic matters from political and security issues during possible talks with his Chinese counterpart Xiao Jie on the sidelines of a meeting of top financial and monetary policymakers from Group of 20 countries in Baden-Baden, Germany, this week.

His request is certain to fall on deaf ears, as Beijing seems determined to use all possible means short of outright violation of international trade rules to punish Seoul for deploying the anti-missile system, which it views as undermining its security interests.

China would follow in the footsteps of Japan in using a currency swap scheme as a tool to increase pressure on South Korea in the course of a row over noneconomic issues.

In January, Tokyo suspended talks with Seoul on reopening a swap line in protest against the installation of a statue symbolizing Korean women forced into Japan’s wartime sexual slavery in the South Korean city of Busan.

South Korea and Japan in 2015 ended their currency swap deal worth $10 billion, the last in a series of swap arrangements set up between the two countries since July 2001. The Seoul-Tokyo swap line reached as high as $70 billion in 2011 before being scaled back as bilateral ties continued to deteriorate over historical and territorial issues. The two sides failed to extend swap deals worth $57 billion in 2012 and $3 billion in 2013.

As of the end of February, Korea’s foreign exchange reserves stood at $373.9 billion, down $130 million from the previous month, according to data from the Bank of Korea. The slight fall was attributed to a decrease in the value of non-dollar currencies when converted into the greenback.

Finance Ministry officials note the country’s currency reserves hover above the upper end of a proper band ranging from $250 billion to $370 billion, which has been agreed on between Seoul and the International Monetary Fund.

Still, there have been rising calls for Korea to move to expand currency swap deals with economic partners as a way to enhance its capability to secure liquidity in case of severe market disruptions.

A report released last year by the Korea Economic Research Institute, a private think tank, suggested the country’s foreign exchange reserves, $367.9 billion at the time, was far from enough to cope with another bout of global financial crisis.

If anything, a currency swap deal is largely a psychological weapon rather than an arrangement with practical effectiveness. But this sort of tool is what Korea needs to pre-empt a possible crisis to be prompted by a set of external risks -- a toughened environment for Korean businesses in China whose economy is slowing, a continuous rise in US interest rates and growing military threats from Pyongyang.

South Korea has swap deals with Australia, Indonesia, Malaysia and the United Arab Emirates as well as China. In addition, the country can draw $38.4 billion from the Chiang Mai Initiative Multilateralization, a multilateral swap arrangement launched by Korea, China, Japan and the 10 members of the Association of Southeast Asian Nations in 2010. 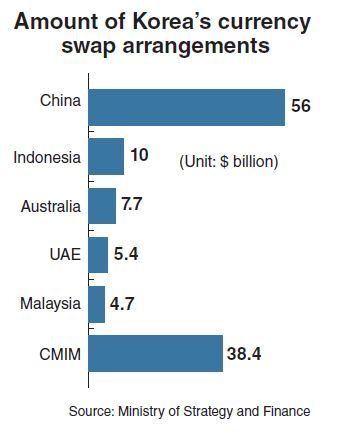 But the termination of the swap line with China in the absence of one with Japan might make Korea’s position look vulnerable as concerns are rising that a string of US rate hikes could prompt capital flight from Asia’s fourth-largest economy later this year. The Bank of Korea barely has room to raise its key rate, which has remained at a record low of 1.25 percent since June, because the move would further weigh on heavily indebted households.

Some experts here note Seoul should have made currency swap deals with the US and Japan in the course of strengthening security cooperation with them over the past years.

“We should have secured a swap arrangement with the US in preparation for China’s retaliation against the deployment of the missile defense system,” said a former top economic policymaker, asking not to be named.

The US has inked currency swap agreements with a selected group of major advanced economies -- including the EU, Canada, Switzerland and Japan -- on a permanent basis to set up an international financial stability mechanism.

Kim Dae-jong, an economics professor at Sejong University, said Seoul needed to seek a more favorable approach from Washington to the issues of a swap arrangement, designation of currency manipulators and renegotiation of a bilateral free trade pact in the course of deploying the anti-missile shield and implementing measures to reduce the trade imbalance.

Seoul should have moved faster to restore a swap line with Tokyo last year in time for the signing of an accord on sharing military information between the two sides, experts say.