The dollar fell 3.4 percent to 1,144.92 won in February compared to a month earlier, the Bank of Korea said in a statement. 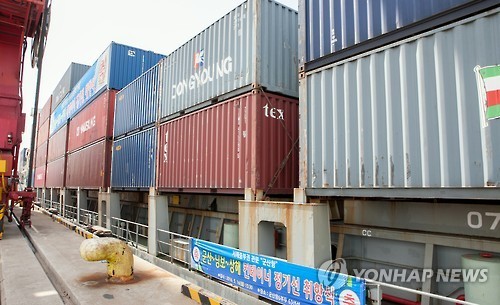 For exporters, the won's gain means decreased income as dollar-denominated earnings from their overseas businesses fall in value when repatriated into the local currency.

Import prices also declined 2.2 percent last month from the previous month as manufacturers could purchase raw materials at lower prices as calculated in the local currency.

Year-over-year, however, export and import prices both jumped on the back of rising oil prices, the central bank said.

Export prices rose 4.9 percent in February from a year earlier, while import prices jumped 9.1 percent during the same period, the BOK said.

The price of Dubai crude, South Korea's benchmark, rose to an average of $54.39 in February from $28.87 a year earlier, a central bank official said, citing an increase in oil prices as reasons for the sharp gain in on-year import and export prices.

South Korea's exports jumped 20 percent in February to $43.2 billion from $35.9 billion a year earlier expanding at the fastest clip in five years on rising oil prices and recovering global demand, according to government data. (Yonhap)