Korea's exports of consumer goods to China tops $7b in 2016

South Korea sold more than $7 billion worth of consumer goods to China last year, a report showed Tuesday, amid growing concerns that this sector will suffer the most from a trade spat between the two countries over the deployment of an advanced US anti-missile system.

The outbound shipments of consumer products reached $7.02 billion as of end-2016, accounting for about 11 percent of all consumer goods sold abroad last year, according to the latest report by the Korea International Trade Association and the Korea Institute of Finance. 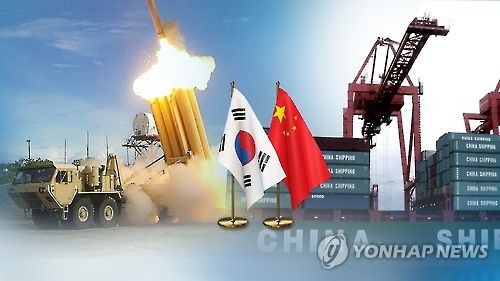 The figure represents only 5.6 percent of total exports to the world's second-largest economy, which stood at $124.4 billion. More than 90 percent of all goods sold to China were intermediate goods such as machinery and industrial components like memory chips.

Although the portion is marginal, consumer goods have emerged as a key export for the South Korean economy, Asia's fourth largest, as the market has posted rapid growth over the past few years, the report said.

The on-year export of five major consumer goods, including cosmetics and pharmaceuticals, grew by 13.6 percent last year, compared with a 5.9 percent on-year drop in the country's overall overseas shipments, it showed.

The stellar performance in the consumer goods sector, however, is making local exporters more anxious since rising diplomatic tension with China could affect growth going forward.

Since last July, Beijing has ratcheted up a hostile stance toward Seoul, in protest of Seoul's stationing of the Terminal High Altitude Area Defense on its soil. Beijing strongly denounced the deployment, claiming that the installation's powerful radar system will be used to spy on its own military.

South Korea's tourism and retail industries are bearing the brunt of what appears to be retaliatory measures taken by China.

Beijing has banned the sale of group tours to South Korea and placed retail outlets run by Korean firms under suspension, among other moves.

"Consumer goods are to some extent overrated because we people can see them more easily. But intermediate and capital goods are traded between businesses, which means they're less likely to be affected once a deal has been signed," Ji Man-soo, a KIF researcher, said. (Yonhap)