Trade between Korea, US rises average 1.7% in past 5 yrs on FTA

South Korea's trade with the United States has grown an average of 1.7 percent per year for the past five years on the back of the bilateral free trade pact despite a downturn in world trade, government data showed Tuesday.

Korea-US trade reached $109.7 billion last year, up from $100.8 billion in 2011, one year before the Seoul-Washington free trade agreement took effect, according to the data by the Ministry of Trade, Industry and Energy. 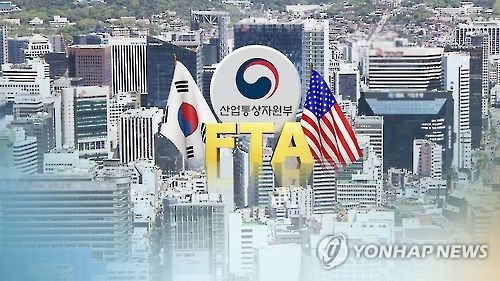 Over the same period, world trade retreated an annual 3.5 percent amid a protracted economic slump.

South Korea's exports to the US gained an annual 3.4 percent over the five-year period, while the country's entire outbound shipments fell 2.3 percent on average.

Imports from the world's biggest economy edged down an average 0.6 percent per year, compared with a 5 percent annual drop in overall imports during the 2011-2016 period.

Asia's fourth-largest economy saw its trade surplus with the US more than double to post $23.25 billion in 2016 from $11.64 billion in 2011, with an average growth rate hitting 14.8 percent over the five-year period.

The sharp increase in the trade surplus sparked concerns that US President Donald Trump will push to renegotiate the Korea-US FTA, as he has denounced the deal as a job destroyer, hinting that he would seek to revise the terms.

The massive surplus has also been under fire from the US government, which could designate South Korea as a currency manipulator.

But in the service sector, South Korea posted a $14.09 billion trade deficit with the US, with an annual growth rate of 10.8 percent from 2011, due to a rise in royalty payments from intellectual property.

"The Korea-US FTA has been a win-win success to both countries," said the trade ministry. "Despite a slowdown in world trade, bilateral trade has maintained an upward curve for the past several years." (Yonhap)