The country's trade surplus came to $7.06 billion last month, up sharply from a surplus of $2.79 billion tallied a month earlier, according to the data from the Korea Customs Service. 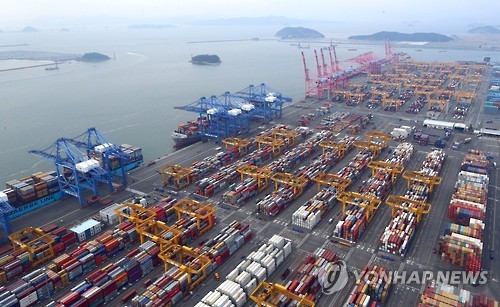 It enjoyed a $5.82 billion in trade surplus with Southeast Asian countries, followed by China with a surplus of $4.54 billion.

But trade with Middle East nations and Japan recorded a deficit of $3.85 billion and $2.42 billion, respectively, the data showed.

Exports rose 20.2 percent on-year to $43.2 billion in February, extending its winning streak to four months in a row, while imports soared 23.9 percent to $36.1 billion last month.

Increasing overseas demand for Korean-made semiconductors and vehicles led the brisk exports, while imports of energy and facility equipment gained ground by a large extent.

In particular, imports of crude oil shot up 71.2 percent in February from a year earlier on rising crude oil prices. (Yonhap)