According to data from the Korea International Trade Association, China and the US accounted for 25.1 percent and 13.4 percent of the country’s outbound shipments last year, respectively.
This heavy reliance on the world’s two largest economies for exports has made Korea’s position more vulnerable to China’s retaliatory steps against Seoul’s hosting of a US anti-missile system and protectionist policies pursued by US President Donald Trump‘s administration.

Hyun Jung-taik, head of the Korea Institute for International Economic Policy, a state-funded think tank, said emotional responses to pressures from the country’s biggest trade partners would be of no help. 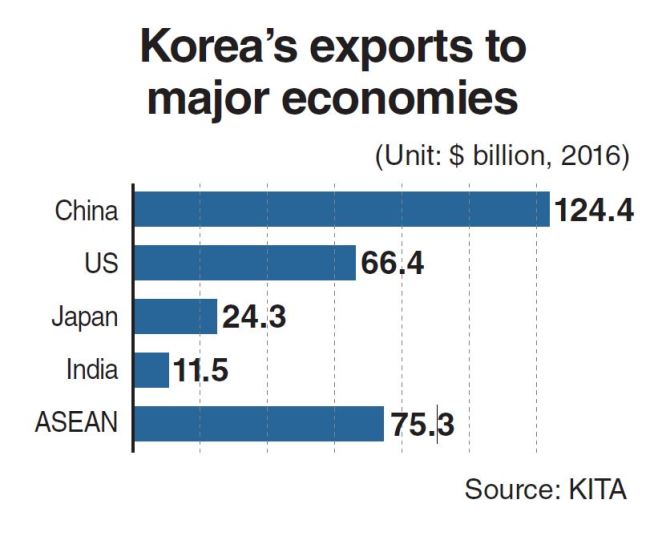 He noted it was important to avoid being put into a similar trouble again in the future through the diversification of overseas markets for Korean companies.

Experts say Korea should actively look for ways to reduce economic dependence particularly on China to make it less tempted to hit Korean businesses with a view to affecting Seoul’s diplomatic and security decisions.

A growing number of Korean companies are turning to the 10-member Association of Southeast Asian Nations and India as two major markets where demand for their goods will continue to increase in the coming years.

Korea’s exports to the 10 Southeast Asian countries reached $75.3 billion in 2016, with its shipments to China amounting to $124.4 billion.

ASEAN members with a combined population of 630 million are expected to continue to increase imports from Korea as their average growth is forecast to be near 6 percent in the years to come.

India is seen to have even a greater economic potential than the ASEAN as it is projected to become the world’s most populous country by 2022, overtaking China, according to UN data.

The International Monetary Fund forecasts India’s economy will expand by more than 7 percent annually over the coming decade, while China is struggling to maintain growth above 6 percent.

Korea’s shipments to India reached $11.5 billion in 2016, accounting for slightly over 3 percent of India’s total imports.

Park Min-joon, an official at the Korea Trade-Investment Promotion Agency, said it would be a matter of time for India, now the eighth-largest destination for Korea’s exports, to emerge as the most important market for Korean exporters.

Experts say Korea should accelerate negotiations to upgrade free trade accords it concluded with ASEAN and India in 2007 and 2010, respectively. Enhancing the liberalization levels of the trade deals is needed to maximize the potential of business ties between Korea and the two economic partners.

An early conclusion of the Regional Comprehensive Economic Partnership would help promote commerce among the 16 Asia-Pacific countries participating in the trade pact, including Korea, China, India and Japan.

Korea also plans to sign a free trade accord with five Central American countries within this year and launch negotiations on a trade agreement with Mercosur, an economic bloc encompassing five South American nations -- Argentina, Brazil, Paraguay, Uruguay and Venezuela -- in June.

Experts say Korea should also seek to boost trade and economic ties with Japan and Russia to reduce risks posed by China and the US.

A report released by KITA last week suggested Korean companies may need to take more risks in Russia amid signs of economic recovery there.

The country’s exports to Russia have dipped at a much faster pace than those of major Western countries that took the initiative in imposing economic sanctions against Moscow following its military intervention in Ukraine in 2014.

In a meeting with reporters this week, Trade and Industry Minister Joo Hyung-hwan said incentives would be offered to encourage small and mid-sized companies exporting their goods to reduce reliance on a certain market, notably China.

Experts say efforts to diversify export markets need to be coupled with efforts to make more products with global competitiveness.

Only 68 goods manufactured by Korean companies held the largest global market share in 2015, compared to 638 for Germany, 607 for the US and 175 for Japan.

“If our companies provide global customers with indispensable goods at a reasonable price, they would not suffer much from any unexpected change in circumstances,” said Choi Joong-kyung, a former top economic official.