Prices of agricultural, livestock and fisheries products in South Korea remain unstable as supply fails to keep up with demand, sources said Thursday.

According to the Korea Agro-Fisheries & Food Trade Corp., prices of eggs and chickens have recently swung to an upturn after leveling off following imports of US and Australian eggs. 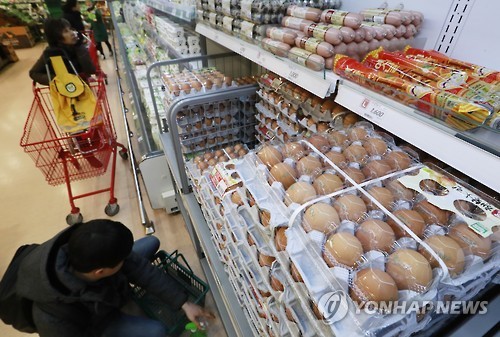 Market sources attributed the price hike to an undersupply.

"Demand is rising faster than supply due to increasing demand from school cafeterias," an official of a large discount store chain said. "Imports of egg-laying hens from the US and Spain have been suspended due to AI outbreaks there."

Another source predicted egg prices to not firm until the end of this year as it takes time to raise a sufficient number of egg-laying hens.

Chicken prices have also switched to an uptick recently. As of March 8, chicken prices stood at 2,200 won per kilogram, up sharply from 1,800 won in mid-February, according to the Korea Institute for Animal Products Quality Evaluation.

In addition, prices of vegetables, meat and fisheries goods have soared recently despite government efforts to lower them through the release of government stockpiles and imports.

As of Wednesday, prices of Chinese cabbage, radish and other major vegetables were 35 percent to 76 percent higher than usual, with beef prices surging up to 27 percent, according to the corporation.

Prices of fish, squid, laver and other fisheries products were also much higher than usual, with a hairtail selling for 12,050 won compared with the usual price of 9,570 won.