Won Hee-seon recently switched from a Givenchy bag to a Prada for a "fresh look," but the decision did not result in a big dent in her bank account.

The secret behind the change of designer luxury bags that ordinarily would have cost a tidy sum of money was simply renting the accessory. 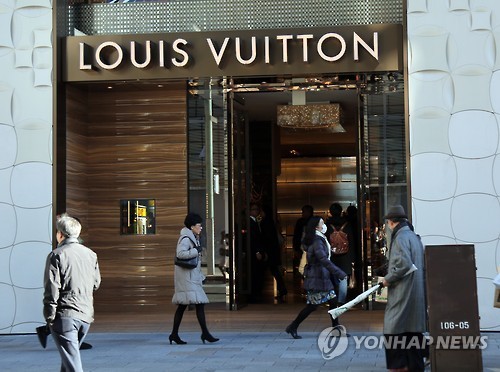 Won is one of a growing number of young South Korean women who have signed up for a monthly membership to rent luxury bags and watches.

"I want to carry Givenchy and Prada bags, but buying luxury goods is not easy as they are expensive and fashion trends could change," Won said. "In that respect, rental services of luxury bags are very appealing."

Won's case illustrates a growing trend among consumers in Asia's fourth largest economy who are slowly opting to rent items they want instead of buying them.

Through the rental services, members can choose an item out of about 500 bags from 37 luxury brands, including Chanel, Louis Vuitton, Bottega Veneta and Burberry.

They can also rent Cartier, Omega, Hermes and other high-end watches.

This kind of service is slowly, but surely gaining ground in South Korea as it meets the needs of women who have a desire to carry luxury bags and wear luxury watches, but cannot afford to do so.

Some South Koreans view luxury goods as a tacit symbol of social status in a country where appearance is important. Many here are also excessively conscious of all sorts of luxury brands.

"I would like to make a good impression at an important occasion," said Park Ye-ran, who has borrowed a Saint Laurent crossbody bag for her friend's wedding next weekend. "I think first impressions are important and I do not want to be taken lightly."

The 25-year-old web designer said she believes that people tend to trust those that have a luxury good on them.

Ordinary consumers like Park point out luxury items are out of reach for many ordinary South Korean women, especially young women, as they are expensive. But rental services make luxury goods more accessible.

"I didn't even think of carrying a luxury bag as I just started my career after graduation. Now, I brag about my bag to my friends," she said. The price of a Saint Laurent crossbody bag can be a burden for those fresh out of college.

The most expensive luxury bag available at the rental services provided by Reebonz Korea, a local startup, is the Chanel Vintage 2.55 large bag, which has a price tag of 7.25 million won ($6,300). Bvlgari Watch BB26SG, priced at 7.7 million won, is also available for customers.

The company exclusively offers luxury rentals to its' members at prices many young women find reasonable. Those who sign up for a membership can borrow any luxury bag or watch by paying 79,000 won per month, with only one item allowed at a time.

Chanel bags, however, are the only exception to the monthly fee; Reebonz rents them out at 19,800 won per day to subscribers, regardless of size or style.

Kim Sung-hye, a 34-year-old office worker, said she is happy with renting luxury goods and that she will continue to use the service. In fact, she had borrowed her Prada Saffiano mini bag for daily use before buying it from Reebonz.

Luxury goods are also just a mouse click away. The service is also available through Reebonz's mobile app. Consumers can receive and return their bags through a complementary delivery service.

"Our vision is to make luxury goods accessible" to consumers, Ha Dong-gu, CEO of Reebonz, said in a interview with Yonhap News Agency at his company in eastern Seoul.

He began the rental services of luxury goods in December after a series of pilot services showed that the emerging business can be a promising one.

The number of memberships for luxury rental services has grown to about 400 women -- mostly in their 20s and 30s -- in just three months.

Ha said he plans to expand luxury rental services to clothing for men and women and men's watches.

Ha said he hopes his startup will play a key role in expanding the luxury rental market as South Korea's most popular food delivery mobile app, "Baedal Minjok," did in the food delivery market.

Baedal Minjok, which means "Delivery Nation" in English, is a market leader with a more than 50 percent market share, followed by "Yogiyo" and "Baedaltong," which are both owned by Germany-based Delivery Hero.

Ha also takes cue from Netflix and Airbnb in expanding and further developing his company's luxury rental services, saying consuming fashion could change in a way that could further help rentals.

"I used to wish I had a luxury bag, but now my worries about bags are gone," Won said. (Yonhap)