Statistics Korea said the number of economically inactive young people, who are neither employed nor unemployed but are taking some time off for various reasons, hit a 4-year high in February.

Such economically inactive youths are not included in the official data of the labor market. The official number of the unemployed hit a 17-year high of 1.35 million in February.

The increase in the number of youths outside the job market comes in light of the country’s major companies having recently scaled down their recruitment size, signaling that the labor market will aggravate further down the road.

Observers say that the recent downsizing trend could also have discouraged youths, who have been on a job hunt for at least several years to completely give up job searching, and eventually pull down the quality of Korea’s young labor force. 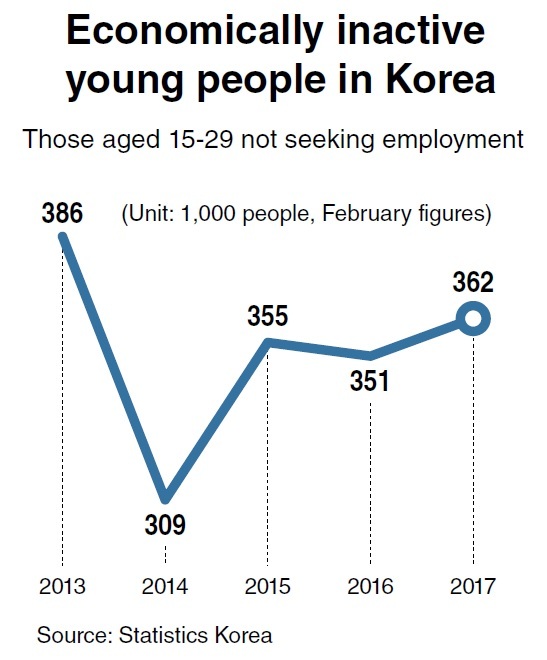 “For a few more years, the population of the youths will grow and more youths could give up job searching. If this continues to occur, they will lose opportunities to learn important job skills,” said Lee Geun-tae, economist at the LG Economic Research Institute.

“After 2020, the youth population will rapidly shrink again. At that time, how well young Koreans are prepared for future industries with good skills will decide the nation’s economic power. This is really worrisome.”

While prices of fresh foods such as eggs, chickens and white radishes have increased since late last year, petroleum, air flight tickets and cosmetics products recently joined the rising trend.

Beauty products such as perfume, moisturizer and eyeliner increased 1.5-6 percent in February from a year earlier, while budget air carriers sought 5-11 percent hikes in their domestic flight tickets during the same period. Asiana Airlines is to raise fares on Jeju-bound flights by 5 percent from April 18.

Transportation fees, encompassing bus, train and subway, also went up 6 percent in February from a year earlier, the fastest growth since 6.3 percent on-year gain in February, 2011, according to Statistics Korea.