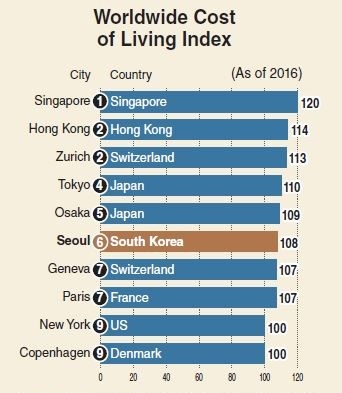 The Cost of Living Index, or general index, shows the difference in living costs between cities. The cost of living in the base city, set as New York, is expressed as 100. The index comprises prices of products and services across some 160 categories such as food, clothing, housing, transportation and tuition. 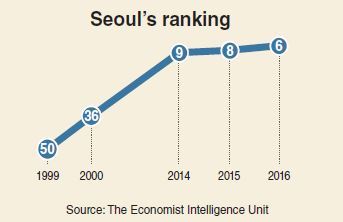 Seoul’s prices surged at the highest rate among all cities in the world, the latest report by the Economist Intelligence Unit showed Wednesday. It jumped from being ranked 36th most expensive city in 2000 to No. 6 last year.

The Worldwide Cost of Living report surveyed 133 cities around the world. Singapore retained its position as the most expensive city for the third consecutive year. The report said Asia is now home to five of the top 6 cities in the survey, as Asian cities have become comparatively more expensive.