By Korea Herald
Published : Mar 22, 2017 - 16:12       Updated : Mar 22, 2017 - 16:12
Korea’s large conglomerates, many of which have been embroiled in a massive corruption scandal that has led to the impeachment of President Park Geun-hye, are now worried about a flood of anti-business pledges by political leaders vying to win the upcoming presidential election.

Early this year, Moon Jae-in, a former head of the main opposition Democratic Party of Korea who has been leading other potential presidential candidates by a large margin in recent polls, unveiled a range of reform measures targeting the country’s 10 biggest family-owned conglomerates.

Nearly all conceivable steps were included in the proposed package to curb the expansion of large businesses, block hereditary succession of corporate control through irregular means and strengthen shareholders’ rights.

He also professed the principle of no leniency on corporate leaders accused of “serious criminal wrongdoing.”

Business circles expressed concern about his proposals, describing them as “excessive regulations” that would hamper companies from making swift decisions on investment and employment amid intensifying global competition.

“If Moon’s pledges are carried out to the full extent, it would become difficult to do business in Korea,” said a corporate executive, asking not to be named.

Moon and other progressive presidential contenders have also backed commercial code revision bills that are aimed at protecting minor shareholders’ interests, but cause fear of destabilizing corporate management.

They have also promised to raise corporate tax rates, going against the global trend of reducing levies on corporate profits.

Economists say there is the need to enhance the accountability and transparency of corporate governance, but caution against going too far in restraining corporate activities on the back of anti-business public sentiment that is rising in the wake of the corruption scandal. 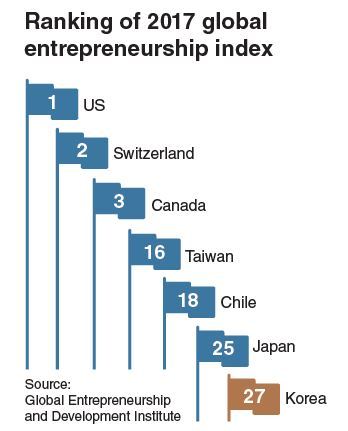 Korea ranked No. 27 in a global entrepreneurship index among 137 countries in 2017, overtaken by Japan, which placed 25th, for the first time in four years. It came behind Chile at No. 18 and Estonia at No. 23 in the index drawn up by the US-based Global Entrepreneurship and Development Institute.

Kim Byung-joo, an economics professor emeritus at Sogang University in Seoul, noted the role of politics should be forging the playground for corporations to be wholeheartedly devoted to business, with the government acting as a fair judge to pinpoint violations that distort competition.

Commentators say the decision by the Constitutional Court to oust Park from office because of her failure to abide by the top law also sent the message that political power should be kept from interfering in corporate management.

The court ruled that she violated provisions of the Constitution that guarantee the property rights and managerial autonomy of private businesses by coercing dozens of companies to funnel donations to two cultural organizations controlled by a long-time confidante.

Her predecessors were no exception from what can now be defined as unconstitutional practices of pressing corporations to fund projects advocated or backed by them.

“We will see this problem repeated in the future unless the country does away with various forms of quasi-taxes and political meddling (in corporate activities),” said Kwon Tae-shin, head of the Korea Economic Research Institute.

The amount of quasi-taxes collected from companies increased from 13.1 trillion won ($11.6 billion) in 2012 to 16.4 trillion won in 2015, with the ratio of quasi-taxes to corporate taxes rising from 32 percent to 36.4 percent over the cited period, according to data compiled by a lawmaker’s office.

Commentators say presidential contenders should pay attention to the caution against political interference in corporate autonomy, being not just preoccupied with stricter regulations on conglomerates.

“Our next leader should be a figure ready to uphold the market economy,” said Kwon.

Economists say it is also necessary to prevent political short-sightedness from hampering the formation and implementation of long-term economic policies to boost the country’s sagging growth potential.

Over the past decades, corporations have been compelled to adjust their investment plans to policies put forward by new presidents with a single five-year term, who were unexceptionally eager to repeal measures initiated by their predecessor.

The inconsistent, short-lived investment plans are held partly responsible for a drop in the country’s potential growth rate to 3-3.2 percent for the period between 2015 and 2018 from 5-5.2 percent for 2000-2005, as measured by the Bank of Korea.

Korea’s real growth rate, which hovered above 5 percent in the early 2000s, fell below 3 percent for two consecutive years through 2016.

Economists note political parties need to help structural reforms essential to bolster the country’s long-term growth go smoothly by passing a raft of bills aimed at strengthening the competitiveness of the economy. Such bills have been shelved at parliament for years.

Among the bills are those on setting up regulation-free industrial zones, promoting service industries and making labor markets more flexible.

“It would be best to leave reform work to companies themselves,” said the corporate executive, who requested anonymity.

Economists indicate corporations should do their part more sincerely in severing the collusive links between big business and politics. As part of such efforts, corporations need to resolve internal problems that leave them vulnerable to political pressure.