The country’s shipments to China rose by 16.4 percent from a year earlier during the first 20 days of this month, following four consecutive months of on-year increases, according to the latest customs data. In February, the growth rate was 28.7 percent, the highest since late 2010.

This continuous increase in shipments of South Korean goods to China, which defies a widening range of retaliatory steps taken by Beijing, reflects the structure of bilateral trade between the two countries.

More than 70 percent of South Korean products shipped to China are intermediary goods, including semiconductors and flat-panel displays, which Chinese manufacturers need to make their key export items. 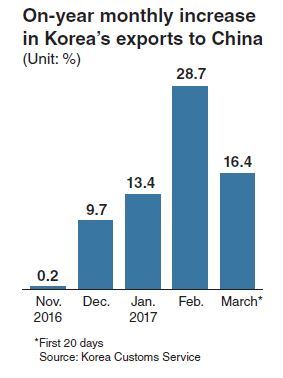 The on-year increase in exports of South Korea-made semiconductors to China accelerated from 5.5 percent in November to 75.9 percent last month, according to data from the Ministry of Trade, Industry and Energy.

Mentioning the dominant position of the country’s chipmakers, a South Korean proposed in a recent newspaper contribution that Seoul consider banning exports of semiconductors to China in response to Beijing’s moves, though many here dismissed the idea as destructive to both economies.

China’s retaliatory measures have so far targeted consumer goods such as cosmetics and food, cultural content, package tours and retail stores run by a South Korean business group that agreed to offer land for the installment of a US anti-missile battery.

But Beijing has shied away from imposing restrictions on imports of key manufactured items from South Korea to avoid direct damage to its own economy.

China also seems to be trying to stop short of violating international trade rules in an outright manner, which would hamper its efforts to be granted the most favored nation status by the US and other major advanced countries.

The Chinese Commerce Ministry on Thursday said China valued trade with South Korea and was respecting World Trade Organization rules. The statement came in response to an earlier appeal by South Korea to the WTO service council to determine if the Chinese measures are in conflict with WTO regulations.

“Both economies are mutually dependent, so wisdom is needed to approach political and economic matters separately,” said Yu Byoung-gyu, head of the Korea Institute for Industrial Economics and Trade.

China’s reliance on manufacturing components and equipment from South Korea has led observers to see Beijing’s efforts to affect Seoul’s security policy by applying economic pressure as doomed to fail.

A report released last week by the state-run Korea Development Bank estimated the escalation of China’s retaliation against the deployment of the anti-missile shield officially called Terminal High Altitude Area Defense would result in South Korea suffering about $20 billion in economic losses, mostly in the tourism and duty-free sectors.

But the amount of loss would be far from painful enough to get Seoul to reconsider the THAAD deployment aimed at countering nuclear and missile threats from North Korea.

In an apparent reflection of growing resentment against Beijing’s retaliatory measures, the proportion of South Koreans opposing the installment of the missile defense shield dropped from 40 percent in January to 34.7 percent in March, according to surveys by local pollsters.

Some observers say China’s moves against the South may be subdued ahead of President Xi Jinping’s planned visit to the US in April for his first meeting with President Donald Trump.

A group of US House of Representatives members last week introduced a bipartisan resolution condemning and calling for an immediate end to China’s retaliatory measures against South Korea.

The move was viewed as a warning that Beijing’s inappropriate pressure against Seoul would not be left unaddressed by Washington.

China’s retaliation, even if eased eventually, looks set to prompt South Korean firms to be more earnest in their efforts to reduce reliance on the Chinese market.

“Regardless of the fallout from the THAAD dispute, the country’s companies are in the final stages of gaining profits from rising demand from China,” said a Trade Ministry official, asking not to be named.

China accounted for 26.9 percent of South Korea’s total exports last month, the largest proportion ever. This hefty dependence is unsustainable as China is striving to curtail processing trade and expand domestic supply chains by pushing for a plan to transform itself into a global manufacturing power in high-tech sectors by 2025.

He noted it is also necessary to increase exports of high-end consumer goods to China to offset a possible decrease in demand for intermediary goods. But those items would still remain easy targets for China’s boycotts in the future.

South Korean companies would likely face broader and more fundamental risks from China unless they diversify export markets and production bases to other regions, including Southeast Asia and India, with a greater sense of urgency, experts say.