Korea’s GDP slightly up, per capita income still below $30,000

According to the central bank, the real gross domestic product expanded 2.8 percent in 2016 from a year earlier, 0.1 percentage point up from the previous estimate of 2.7 percent, due to larger-than-expected construction spending in the fourth quarter.

“We had previously expected that the construction spending in the fourth quarter would be not very good. But when the statistics for December came out, the decrease was smaller than expected. That part was reflected in the latest GDP growth revision,” said Chung Kyu-il, director of BOK’s economic statistics department.

In the fourth quarter, the nation’s GDP expanded 2.4 percent from a year earlier, slightly faster than the January estimate of 2.3 percent, the bank’s data showed. Construction spending rose 10.7 percent in 2016 from a year earlier, buttressed by the growth of residential buildings. Government spending, which rose 4.3 percent on-year, also helped the economy grow, the BOK said.

Korea has been in the low GDP growth trends with the growth rate remaining under 3 percent since 2012, except for 3.3 percent growth in 2014.

The weak growths led to anemic growths of the gross national income per capita, which has remained under the $30,000 level for 10 consecutive years since it first surpassed the $20,000 mark in 2006. 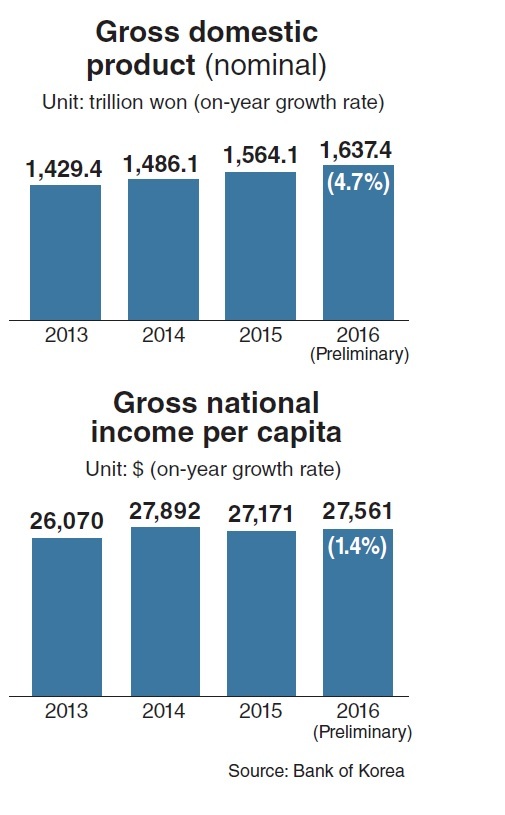 The GNI per capita only inched up 1.4 percent on-year to reach $27,561 in 2016 due to the weakened local currency against the greenback and an increased number of population, the BOK said. GNI per capita combines domestic and foreign output by residents in the country and divides the figure by the population.

In local currency, GNI per capita was up 4 percent last year from a year earlier. The won lost 2.9 percent against the US dollar to average at 1,160.4 won per dollar in 2016.

Exports, the main driver of the Korean economic growth, went up 2.1 percent on-year in 2016 on the back of increase shipments of semiconductors and chemical goods, while imports gained 4.5 percent over the same period.

The latest data on weak GDP growth and per capita income under $30,000 shows that the Korean economy is rapidly losing steam, experts said.

“The economy should do away with the social atmosphere that puts too much stress on thrift. People should be encouraged to spend more time doing leisure activities to jumpstart the private consumption.”