The predicament of the country’s households and enterprises struggling to service their growing debt is set to be exacerbated down the road as interest rates will likely climb.

Since June, the Bank of Korea has held its key rate at a record low of 1.25 percent to help bolster the sluggish economy, which is forecast to grow below 3 percent for a third consecutive year in 2017.

But BOK policymakers will come under increasing pressure to tighten their stance, with the US Federal Reserve expected to hike the federal funds rate twice more within the year, following a 0.25 percentage point increase earlier this month to a range between 0.75 and 1 percent.

The reversal of interest rates in the two economies would be hard for Korea to bear, as it might disturb the country’s financial markets by prompting capital flight.

The country’s households and companies weighed down by rising debt remain particularly vulnerable to an upward trend in interest rates. They have already seen borrowing costs climb in recent months as commercial banks are moving to raise lending rates. 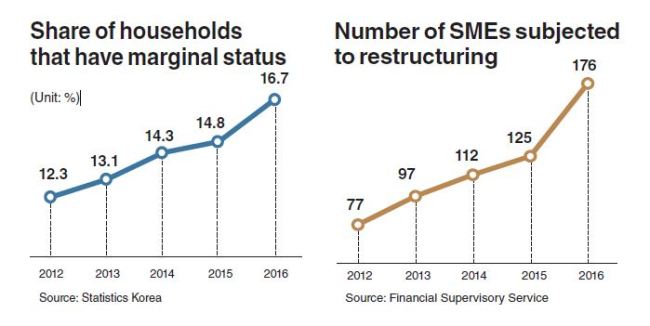 The number of marginal firms, which have failed to make interest payments with their operating profits for three consecutive years, rose from 2,400 in 2010 to 3,278 in 2015, according to data from the Financial Supervisory Service. The figure is estimated to have risen further last year amid the prolonged economic downturn.

Most of the financially strapped companies are small and medium-sized enterprises.

The number of SMEs subjected to restructuring increased from 77 in 2012 to 176 last year, the highest since 2009 when the economy was reeling from the fallout of a global financial meltdown, showed data from the financial regulator.

According to figures from Statistics Korea, the number of marginal households, which spend more than 40 percent of disposable income to service debt, rose from 1.325 million in 2012 to 1.815 million last year. Their proportion of total households also climbed from 12.3 percent to 16.7 percent over the cited period.

According to a separate calculation by the Korea Investors Service, which defined marginal households as households whose income minus minimum living costs falls short of debt service costs, the number stood at 2.16 million last year, accounting for nearly 20 percent of total households.

The BOK estimated a 1 percentage point hike in interest rates would increase the number of marginal households by about 70,000, with the average annual amount of interest payments by indebted households rising by 1.36 million won ($1,220).

Coupled with the rapidly aging population, the soaring household debt, which exceeded 1,344 trillion won last year, has been weighing on consumer spending in Korea.

Despite a rebound in exports, sluggish domestic consumption dragged down the country’s economic growth rate to 0.4 percent in the final quarter of last year from 0.6 percent in the previous quarter.

“Korea may find itself left behind other major economies in the upward global economic trend,” said Joo Won, a researcher at the Hyundai Research Institute.

Weak domestic spending resulted in a steep increase in debt owed by self-employed people. The amount of debt held by them rose by 60 trillion won to 480 trillion won in 2016.

Due to increasing difficulties finding jobs, the number of self-employed Koreans rose at the fastest clip in nearly 15 years to 5.52 million in February, up 213,000 from a year earlier, according to Statistics Korea.

It is necessary to ease the financial burden on marginal households by providing more rental houses, strengthening the social safety net and cutting interest rates on loans to them.

Kim Young-yong, a professor emeritus of economics at Chonnam National University, noted a more viable and fundamental solution would be to create more well-paying jobs by boosting entrepreneurship.

The number of employees increased by 1.5 percent from a year earlier to 25.78 million last month, according to Statistics Korea. Among them, 4.02 million were temporary workers who work less than 36 hours a week, and nearly half of them were paid less than the minimum wage.

“It is notable that the increase in the number of employees was accompanied by a rise in the unemployment rate,” said Kim Sung-hee, a professor at Korea University’s Graduate School of Labor Studies.

“This phenomenon shows Koreans have difficulty landing decent jobs even if they are willing to join the workforce,” he said.

Experts note restructuring work needs to be accelerated along with efforts to boost entrepreneurship through drastic deregulation in order to help strengthen corporate competitiveness and eventually increase employment.