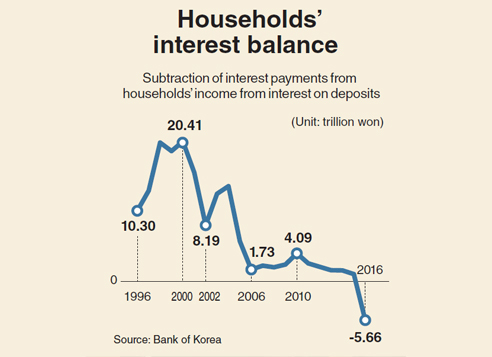 Households paid more in interest than gaining interest from their deposits, posting the first such deficit in 2016, Bank of Korea said Wednesday.

The so-called interest balance came to a minus as the households’ interest payments grew at a faster pace than interest income, and as financial institutions charged more interest on loans to boost their earnings.

The income from interest on deposits at banks and financial institutions reached an estimated 36.1 trillion won, up 5.4 percent from 2015. Interest payment reached 41.8 trillion won ($37.5 billion), up 12.6 percent on-year.

The interest shortfall therefore came to 5.7 trillion won, the first deficit since the central bank began collecting related data in 1975.