[Herald Interview] Justice should be priority in setup of independent investigative body: lawmaker

By Kim Bo-gyung
Published : Mar 27, 2019 - 16:50       Updated : Mar 29, 2019 - 13:20
Successive presidents and administrations over the past 20 years have failed to fulfill their pledges to establish an independent body with the power to investigate and indict high-ranking government officials as well as the president’s family members.

The National Assembly has hit a snag in its plans to fast-track 10 key bills that deal with abuses of power, including one concerning the proposed investigative unit and another that would readjust the division of powers between the prosecution and the police. Lack of support from the main opposition Liberty Korea Party and the minor opposition Bareunmirae Party is the major obstacle.

Rep. Pyo Chang-won of the Democratic Party of Korea said political parties needed to set aside self-interest and do the right thing by greenlighting the long-awaited investigative agency.

“Though I am afraid and scared, I support and welcome the independent investigative agency. As John Rawls’ ‘veil of ignorance’ suggests, nothing can be done by thinking about the impact the decision could have on the decision-maker in the future. What is right should be prioritized,” Pyo told The Korea Herald last week at his office at the National Assembly in Yeouido, Seoul.

A former police officer who once taught at the Korean National Police University, the first-term lawmaker now serves on the National Assembly’s special committee for judicial reform.

Pyo added that while the degree of support for the creation of an independent agency may differ among high-ranking officials who might someday be its investigation targets, there is an overall societal consensus on the need for such an organization.

In the wake of ex-Supreme Court Chief Justice Yang Seung-tae’s abuse of his judicial authority, the snowballing Burning Sun scandal that includes allegations of police misconduct, and the reinvestigation of sexual assault and bribery allegations against former Vice Justice Minister Kim Hak-eui, calls for an independent investigative body have grown louder than ever.

The general social consensus notwithstanding, the conservative Liberty Korea Party objects to the creation of such an agency, arguing that the government is merely seeking to suppress opposition by scrutinizing the conservative leadership of past governments that held power for 10 years.

Of the country’s five political parties, the main opposition is alone in opposing the establishment of an independent agency, even though many of its lawmakers, then with the Saenuri Party, the precursor to the Liberty Korea Party, had proposed legislation in 2012 that would have established a similar investigative body. 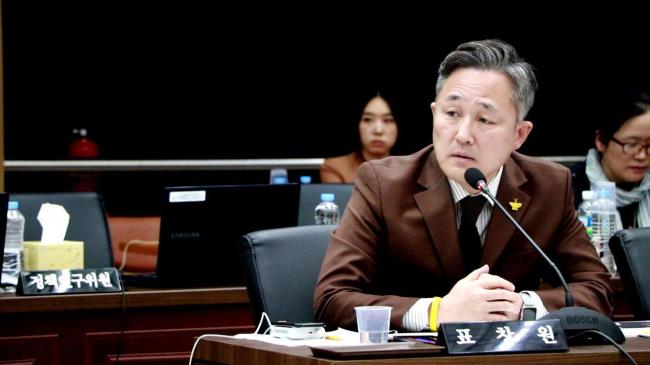 “High-ranking civil servants, particularly prosecutors and judges, were often found to be at the core of the country’s corruption. We have witnessed multiple times that the police and prosecution aren’t able to unveil wrongdoings by powerful people, because of the influence they wield. Hence, the public consensus on the organization,” Pyo said.

According to a 2016 survey by local pollster RealMeter, 69.1 percent of the 515 adults surveyed supported the creation of an investigative body, whereas 16.4 percent were against it.

Posing an unexpected stumbling block, the minor opposition Bareunmirae Party has issued a take-it-or-leave-it ultimatum to the ruling party, arguing that the envisioned investigative body should not be given the authority to indict.

In South Korea, the prosecution has the power to investigate suspected crimes and the sole authority to indict suspects.

At least 11 people have to support the bill for it to pass the 18-member special committee for judicial reform, meaning backing from representatives Kwon Eun-hee and Oh Shin-hwan of the Bareunmirae Party is imperative.

The reallocation of the authority granted to the police and the prosecution to investigate cases and indict suspects is the subject of another contentious bill on the fast track at the National Assembly’s extraordinary session.

“Giving the police the investigative authority and the prosecution the authority to indict is a must to maintain a system of checks and balances. This is the basic, the most ideal and the ultimate goal,” Pyo said.

“But there are realistic hurdles to instantly imposing the change, so it needs to be done in a steadfast manner. An immediate ban on prosecutors from investigating, which it has been doing for the past 70 years, could cause confusion.”

The committee has not yet mapped out a detailed timeline for the proposed transition.

The sweeping powers granted to the nation's 2,000 prosecutors, who have the authority both to investigate cases and indict suspects, has long blamed for a slew of problems. Most prominently, they are seen to be behind cover-ups shielding high-ranking officials from the consequences of wrongdoing. They also serve to limit the authority of the police, who are ultimately answerable to the prosecution.

The conservative Liberty Korea Party, though it previously opposed the move to reallocate investigative powers, introduced its own version of that bill earlier this week. It remains staunchly opposed to the creation of a new investigative body on the grounds that the same ends can be achieved by adjusting the division of powers between the police and prosecution.

“I greatly welcome the Liberty Korea Party’s version of the bill. Despite our differences, the fact that the party has proposed a bill signifies the first step for discussion and compromise,” Pyo said.