Seoraksan and Chiaksan: gems in Gangwon worth a visit


A note to those wishing to scale up South Korea’s mountain ranges: Avoid spring, as many parts of the country’s famous mountains could be closed off to minimize the risk of wildfires.

Korea’s national parks had roped off some routes from Feb. 15 to May 15 this year. The early dry season closure did not include routes to the peaks of Bukhansan and Chiaksan, two of the three mountains visited for this series. But many trails were closed on Seoraksan, including one leading to the summit.

For future reference, visit Korea National Park’s homepage -- www.knps.or.kr, in Korean, English, Japanese and Chinese -- to find out about closures. The mountains are closed off in autumn as well, conventionally from November to mid-December. Information about Hallasan National Park is not available here, as it is operated by Jeju Island authorities.

This series was created in collaboration with the “Drone and Phone” series produced by DJ Clark of China Daily. Videos and stories from the series can be found at https://www.droneandphone.com.


Seoraksan is one of the highest mountains on the Korean Peninsula and among the toughest to climb, peaking at Daecheongbong at 1,708 meters above sea level.

The entrance to the mountain starts as high as around 900 meters above sea level, but jagged rocks and rough terrain definitely make the climb challenging.

One of its most famous features is the Ulsanbawi Rock, sometimes referred to as the face of the national park, consisting of six granite peaks that provide a spectacular view of the mountain range and the surrounding areas, including the city of Sokcho and the East Sea.

Legend has it that Ulsanbawi -- while on the way to Geumgangsan located in what is now North Korea -- had settled on Seoraksan after mistakenly thinking that such a beautiful mountain could only be the famed Kumgangsan.

As hiking to the top was out of the question, we opted for scenery, heading instead for what is called the nature observation hiking course toward Yongso Falls.

The 3.2-kilometer route took less than two hours for a round trip. The gradually inclining path, the beauty of the mountain scenery, the light breeze of the creek and the sounds of the river flowing by our side made for an enjoyable walk, offering a sneak peek at what is widely known as one of the toughest mountains to climb here.

Our trip commenced near Jujeongol Valley, located at Osaek-ri, Gangwon Province. The entrance to Jujeongol is located near Osaek Bus Terminal, and accommodations around a five-minute drive away.

There is an information center near the Osaek-ri parking lot and the terminal, and a huge signpost guiding you toward Osaek Mineral Spring 800 meters from the parking lot.

A visit to Mangwolsa Temple, a mere 100 meters away from the spring, could be a nice detour, though there is another temple Seongguksa along the trail. Neither temples are huge or immensely populated, but they provide a nice cultural experience and good photo spots.

The trail itself was enjoyable rather than challenging, as most of the route is covered in walking deck. We hardly broke a sweat as we reached our first checkpoint at Seongguksa.

On some other day, we could have taken the path toward the Mangyeongdae cliff and Daecheongbong peak from this route. But the dry season of May did not allow it.

We hiked toward Geumgangmun, which is actually a huge rock with a human-sized crack in it. Legend has it that if you make a wish as you walk across that crack -- quite easy for an average-sized Korean man -- it will come true.

Along the way we saw some creatively named spots like Seon-nyeo-tang, which translates as the bathtub of Seon-nyes -- supposedly where angelic life forms would drop out of the skies to wash themselves. It was basically just a pond with a small waterfall over it, but it was beautiful nonetheless.

A landmark in this part of the mountain is the 120-meter-tall Dokju-Am rock, standing tall near the entrance of Jujeongol Valley to welcome visitors. 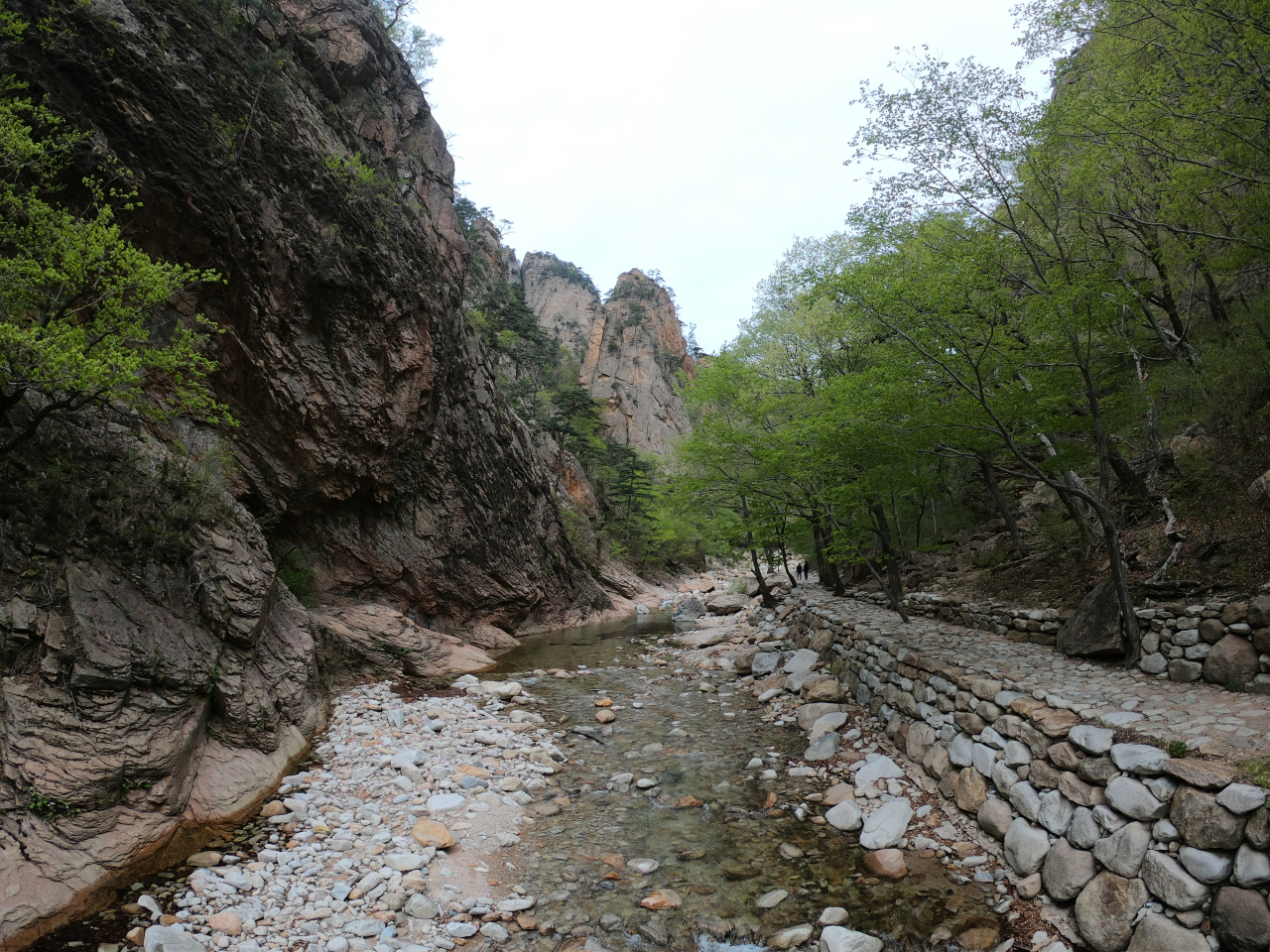 Near our final destination Yongso Falls was an open space with plenty of flat rocks to sit on, a perfect place to enjoy packed meals.

Overall the trail did not have a ton of glamor or epic cliffs, but it was a memorable and enjoyable journey.

The trail was beautiful and soothing, and ended with a perfect picnic spot. It is ideal for families with young children to visit.


We set out southwest toward Chiaksan National Park, and arrived at the foot of the mountain after about an hour’s drive. We parked the car at the parking lot of another temple located at the doorstep of the mountain -- which, if you noticed the pattern -- is pretty standard for most famous mountains here.

The history of the temple dates back to the seventh century, though it was reconstructed in the 18th century.

We then set off on the breezy Seryeom Waterfall course, which was a 2.1-kilometer hike from the temple that ranges from easy to too-easy in terms of hiking difficulty.

Even though we started out very early in the day, hikers could already be seen on the course. A middle-aged man told me he was the resident of a nearby village next to Wonju City and that he takes a daily stroll to the waterfall.

The waterfall was nice, but it wasn’t eye-popping. To be honest, Chiaksan is not known for the most beautiful nature on the peninsula. But it was quite pretty, and the hike up to the Birobong peak was memorable.

Standing at 1,288 meters above sea level, Birobong on paper seemed to be a ho-hum hike. It is just a little taller than Bukhansan, so I wore everyday clothes and worn-down sneakers for the hike. How hard could it be?

The first clue that I was wrong should’ve been that there was elevation of nearly another 1,000 meters to the top yet the remaining trail to the peak was only 2.7 kilometers.

A near-vertical climb showed its gruesome face right across the corner from the petite waterfall. The trail was littered with sharp rocks and was steep uphill, accompanied by ropes, which were definitely needed.

It could be taxing for your legs regardless of which path you take, and you should save some energy for the way down. The steep path could also be dangerous for those with wobbly knees, as I would soon learn the hard way.

From time to time, the lush plant life surrounding us cleared out to provide quite a spectacle. At one point near the top, there is an observation deck that sometimes goes into the clouds -- if you are lucky.

As luck would have it, we were welcomed by clear skies that provided a full view as far as the eyes could see. A little less than an hour after leaving Seryeom, we had the peak in sight.

The last segment of the hike was the toughest despite being only a couple of hundred meters long. The constant steep hike and wooden stairs were surprisingly long. We took the shorter path, but a slightly longer path through the Birobong Samgeori (intersection) would have been somewhat easier. Then again, where is the fun in that?

A little over an hour into the hike from the waterfall, we reached the summit, and the 360 degree-view from the top was spectacular. 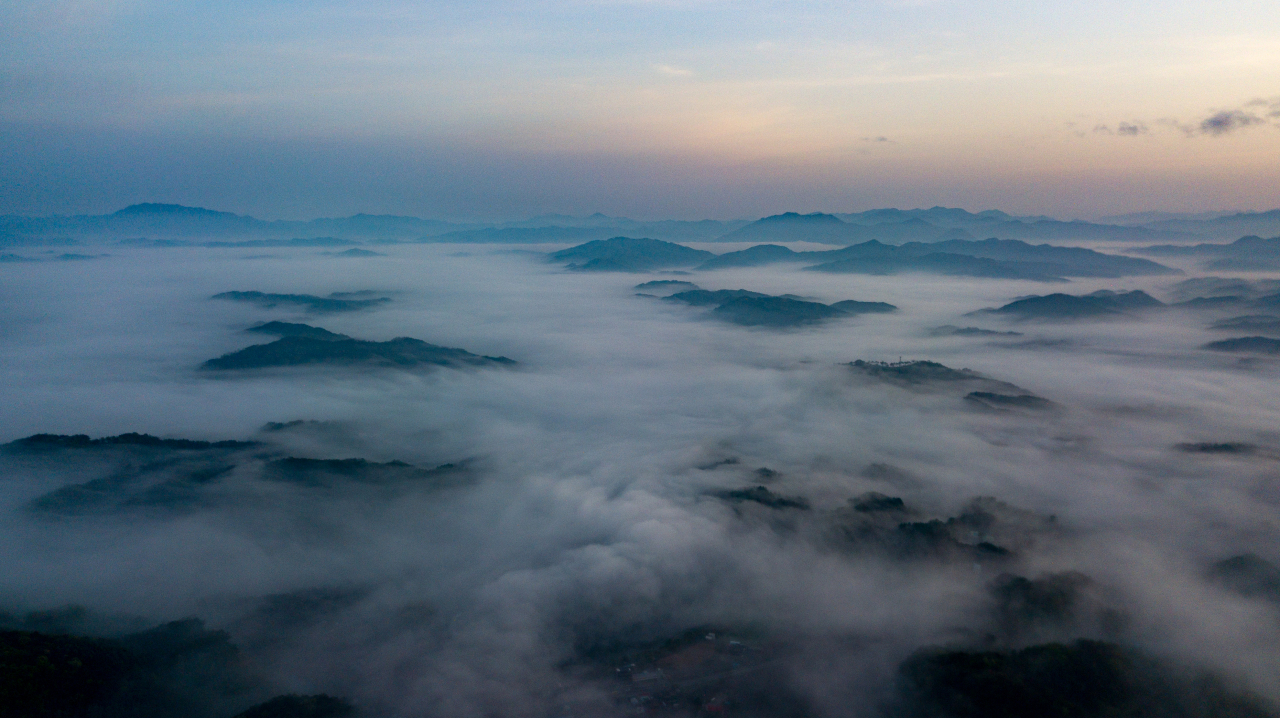 We had the entire city of Wonju on one side, and the rest of the national park on the other. Since it was early -- we ran into just two people from the waterfall to the peak -- the peak was nearly empty, and a little chipmunk came up to give me a curious look.

It was a great day, and an excellent one to be up there. A few notes: One, you may want to start your hike early, as you may be able to have the entire mountain to yourself. Two, make sure you reach Seryeom Waterfalls by 3 p.m. at the latest because the bridge leading to Birobong closes after that for safety reasons. Three, as mentioned before, make sure the part of the mountain you wish to visit is not closed off.