The Organization for Economic Cooperation and Development (OECD) on Thursday slashed its growth outlook for South Korea's economy this year to 2.1 percent amid a slowdown in global trade. 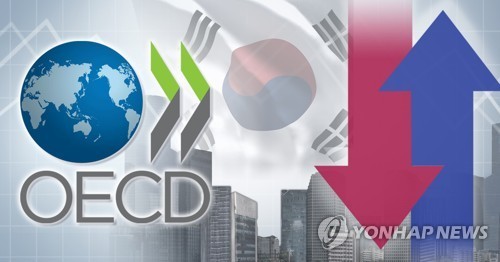 Growth in South Korea "has moderated by more than expected this year, in part due to persistently weak global trade and soft import demand in China," the OECD said in its report. "These factors are expected to persist, but recent steps to ease macroeconomic policies should support domestic demand growth in 2020."

South Korea -- a small, open economy -- depends heavily on exports and foreign capital investment, a situation that makes it vulnerable to external shocks.

The latest downward revision came amid concerns that South Korea may not achieve its revised growth target this year as exports slowed amid an ongoing trade conflict between the United States and China and more recently a trade row between South Korea and Japan.

In July, South Korea cut its economic growth outlook for this year to between 2.4 percent and 2.5 percent from its previous forecast of between 2.6 percent and 2.7 percent in December, citing weak exports and sluggish investment.

Global rating agency Standard & Poor's also sharply slashed its growth forecast for South Korea's economy this year to 2 percent in July from its previous estimate of 2.4 percent in April, citing rising uncertainty about the global trade outlook and weaker consumption.

South Korea's exports fell 13.6 percent on-year to US$44.2 billion in August, extending their on-year decline for the ninth consecutive month due mainly to the Sino-U.S. trade dispute and a prolonged drop in prices of semiconductors, a key export item for Asia's fourth-largest economy.

Outbound shipments of chips fell 30.7 percent in August from a year earlier, dealing a blow to South Korea, where semiconductors account for one-fifth of its exports.

The expansionary budget -- which needs parliamentary approval -- represents a 9.3 percent hike from 2019 and marks the second straight year that the budget proposal has risen by more than 9 percent.

"These would be the weakest annual growth rates since the financial crisis, with downside risks continuing to mount," the OECD said in its report.

"Collective effort is urgent to halt the build-up of trade-distorting tariffs and subsidies and to restore a transparent and predictable rules-based system that encourages businesses to invest," the OECD said. (Yonhap)