[Weekender] Into the red, yellow and orange

With nearly 70 percent of its territory covered by mountains, South Korea is spoiled with choices for fall getaway destinations where the scenery is a magnificent display of vibrant colors.

Autumn reds and oranges have already started to emerge at some high peaks in northern parts of the country. The fall foliage is expected to be most spectacular in late October to early November.

Just beware of possible heavy weekend traffic on roads to popular destinations. Even mountain trails could be jammed with hikers.

Here are some of the best spots to see the fall foliage in Korea.

A forest of 2,000 gingko trees turns into a magical place with a vivid display of golden foliage.
More than just the beautiful scenery, there is a heartfelt story behind this private forest: A man singlehandedly planted and cared for the trees for over three decades in a get-well wish for his bedridden wife.

Located at the remote edge of a quite rural town called Gwangwon-ri, it has been open to the public only during October since 2008. Not designed to be tourist-friendly, it didn’t even have a parking lot or restroom at first, but Hongcheon County installed them for the sake of visitors.

“It is purely through word-of-mouth that the forest became a popular autumn travel destination, drawing crowds,” Hongcheon County said in a press release.

Designated as a national park, Naejangsan is beautiful all year round, but it is ethereal when shrouded in yellow, orange and red leaves. It is a place where visitors regardless age or hiking capacity can enjoy the overhead shot of splendid mountain peaks with the help of cable cars.

What Naejangsan is most famous for is its Foliage Tunnel, a long archway stretching from the entrance of the park to the temple Naejangsa lined with over 100 maple trees on either side. Tourists can take in the season’s splendor by walking the pathway on foot or hopping on the shuttle bus, which goes all the way to the ticketing booth for the cable car that takes riders to the summit in just four minutes. Expect long lines to get tickets though.

This year, the colorful autumn changeover is expected to start around Oct. 17, reaching its peak on Nov. 3.

Admission to the park is 3,000 won for adults, 1,500 won for middle and high school students and 500 won for elementary school kids. The website of the Korea National Park Service at www.knps.or.kr has information in Korean, English, Japanese and Chinese.

The historic city of Gyeongju is an all-time favorite tour destination for its historical significance. But it offers some of the best spots for autumn leaf viewing as well. The Bulguksa Temple is one among them.

In autumn, the 1,500-year-old UNESCO World Heritage Site offers a magnificent view of old Buddhist pagodas and architecture accentuated by splendid fall colors of the low-lying Namsan at its back.

First built in 528 during the Silla Kingdom, the temple has endured cycles of damage and repairs and is still under partial restoration work. It holds seven national treasures, a number of additional important heritage sites and the Seokguram Grotto.

Nami Island draws thousands of visitors every month, but the prime time to visit it is when its abundant maple, gingko and Metasequoia trees all burst out their exquisite colors in fall. 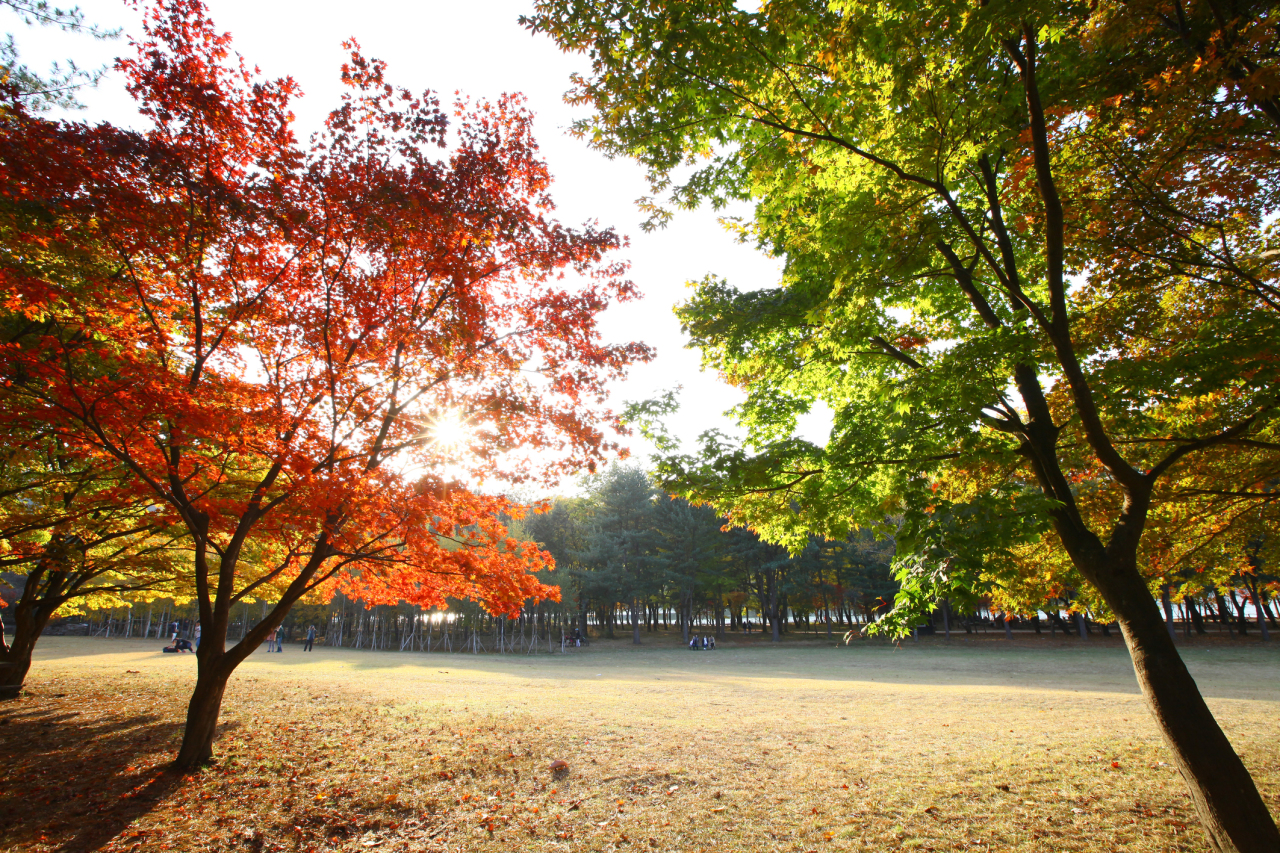 To welcome visitors during peak foliage season, Nami Island’s operator brings in 100 tons of ginkgo leaves from Seoul and scatters them on the ground, creating what looks like a golden carpet. The cost of admission, including the ferry ride, is 10,000 won for adults and 4,000 won for children. For more information, visit www.namisum.com, or call (31) 580-8114.

Seoul and its surrounding Gyeonggi Province have plenty of great viewing spots too.

Bukhansan, the only national park in the metropolitan area, is magnificent in fall, although climbing all the way to its 835-meter top may require some hiking capacity. Seoul Forest in the eastern Seoul district of Seongdong and Olympic Park in Jamsil could offer more leisurely strolls coupled with excellent foliage viewing experiences.

Sky Park in Sangam-dong, northwestern Seoul, is famous for its scenic eulalia grass field. The park will hold its annual Seoul Eulalia Festival from Oct. 18-24, during which it will remain open until 10 p.m. with the entire grounds aglow with light. There will be music, performances and hands-on experience programs to enjoy.

Office workers in central Seoul looking for a lunchtime encounter with the season’s colorful displays could head to the Deoksugung Stonewall Walkway, a picturesque pedestrian footpath that stretches from Deoksugung Palace by Seoul City Hall via Jeongdong Theater. The path runs a total of 1,100 meters. A magnet for both local and foreign tourists, the walkway is most popular in fall, when gingko leaves cover the ground.