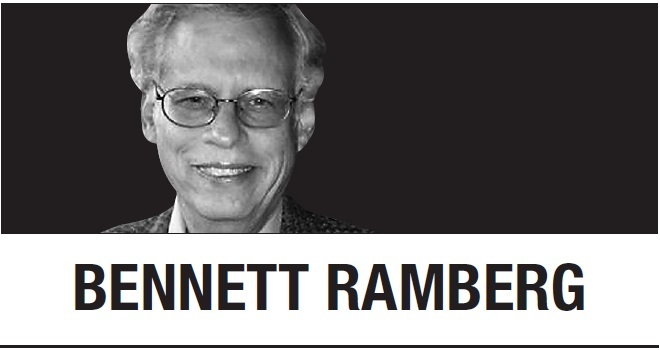 Is nuclear-arms control unraveling? The 1987 Intermediate-Range Nuclear Forces Treaty has collapsed, the 2015 Iran nuclear deal is teetering, and North Korea has continued to expand its nuclear and ballistic missile arsenal. Worse, it is unclear whether the United States will stick with the New START Treaty when it expires in 2021. That agreement limits (at 3,000) the number of strategic weapons Russia and the US have pointed at each other.

Fortunately, history offers some solace. During and after the Cold War, periods of arms-control breakdown were typically followed by phases of reconstruction. But reversing course is never easy. When it comes to bringing Russia, Iran and North Korea into compliance, past experience shows that there are limits to what can be accomplished by leveraging alliances or pursuing military action. The remaining options are economic sanctions -- which are effective only up to a point -- and a further arms buildup, to induce renewed negotiations.

To be sure, alliances historically have played an important role in nuclear nonproliferation. In Europe, the US-NATO nuclear umbrella prevented the bomb from spreading beyond Britain and France. When US intelligence agencies learned in the 1970s and 1980s that South Korea and Taiwan had secret nuclear-weapons programs, America threatened to withdraw its military and economic support, and the programs eventually were shut down.

But intra-alliance pressure has no role to play with respect to loners like North Korea, Russia and Iran. Despite China’s military alliance and occasional summitry with North Korea, it has little influence over Kim Jong-un’s nuclear ambitions. And while Britain, China, France, Germany and Russia may yet be able to pressure the US into renewing dialogue with Iran, their efforts have yielded no results so far.

The use of force in nuclear-arms control has long been contemplated, but rarely pursued, owing to the risks of retaliation or radiological fallout. When these risks are absent, military action becomes attractive. In 1981 and 2007, Israel bombed suspected Iraqi and Syrian nuclear reactors under construction, without blowback. In the 1991 Persian Gulf War, the US Air Force struck Iraq’s concealed enrichment plants with impunity. But this is not an option against Russia and North Korea today. A strike on Russia’s contraband intermediate-range missile arsenal or on North Korea’s nuclear program could bring about the very scenario that arms control is supposed to prevent: nuclear war.

Iran’s situation is different. Fearing further Iranian enrichment activities, the US could, in theory, fashion a limited strike on Iran’s nuclear facilities, on the assumption that the threat of further US action would deter an Iranian response. But Iran is not Iraq or Syria. Either directly or through its various regional proxies, Iran could unleash a wave of aggression against US interests, as demonstrated by the recent attack on Saudi Arabia’s oil infrastructure. US policymakers would have to weigh this risk seriously.

Barring effective alliance pressure or military action, another option historically has been to build up one’s own arsenal. In the early 1960s, America resumed nuclear-weapons tests in response to the Soviet Union’s violation of the 1958 test moratorium; and this paved the way for the 1963 Partial Nuclear Test Ban Treaty. Similarly, the INF was agreed on after the US deployed intermediate-range missiles in Europe in response to Moscow’s introduction of such weapons. In each case, both sides concluded that tit-for-tat buildups had only increased their insecurity.

But in today’s climate, using nuclear escalation to induce another round of arms-control negotiations would yield only mixed results. The US could try to intimidate the North Koreans by returning to South Korea the nuclear weapons that it removed in 1991. But given that Kim associates the bomb with his own survival, such a move would likely ratchet up tensions on the Korean Peninsula and raise China’s ire. The better way to prevent nuclear war on the Korean Peninsula, then, is classic deterrence, leveraging America’s offshore nuclear umbrella and onshore conventional weapons. At the same time, continued North Korean-US diplomatic dialogue -- if not relations -- would reduce the risk of a conflict arising from some miscalculation or misunderstanding.

Iran, by contrast, has no nuclear arsenal to ramp up or bargain down. Rather, it has a nuclear-enrichment breakout capacity that the US wants to eliminate. Hence, the US is tightening sanctions, increasing its military presence in the Persian Gulf, and launching cyberattacks to break Iran’s will. In response, Iran has increased enrichment, disrupted oil shipping in the Persian Gulf, attacked Saudi oil infrastructure, and threatened US interests and allies across the Middle East. The question now is whether brinkmanship will lead to a conflict or a mutual drawdown that would allow for renewed arms-control talks, as in the earlier US-Soviet cases.

In these unsettling times, it is natural to wonder whether arms control has run its course. Although most nuclear nonproliferation and test-ban treaties remain in place, the global arms-control regime is under strain. Nonetheless, in its many iterations, it has shown remarkable resilience over time. That resilience will be tested repeatedly in the months -- if not years -- to come.


Bennett Ramberg
Bennett Ramberg, a policy analyst in the US State Department’s Bureau of Politico-Military Affairs under President George H.W. Bush, is the author of “Destruction of Nuclear Energy Facilities in War and Nuclear Power Plants as Weapons for the Enemy.” -- Ed.