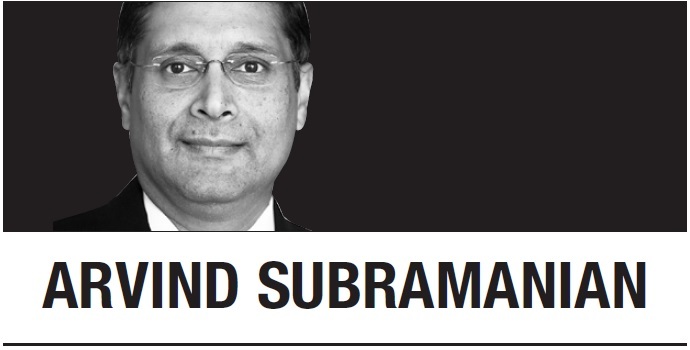 Almost a decade ago, China bulls like Martin Jacques and I predicted the rise of the People’s Republic at the expense of a declining United States. Today, with the two superpowers unabashedly jostling for hegemony -- their trade war being just one sign of this -- it is time for a fresh assessment.

It is tempting to view the US-China rivalry as just another superpower transition in a long line going back to the classical shift of power from Athens to Sparta. But this case is different.

Traditionally, a strong rising power has challenged a weakening incumbent, making the outcome preordained. The only question was whether the transition would be peaceful or violent.

This question also applies to the US-China struggle. But the outcome is far from inevitable, because the powers of both the aspirant and the incumbent are eroding -- albeit in different ways.

Let’s start with the more obvious case of America. Previous predictions of US decline were based on unfavorable domestic economic and social trends such as slowing productivity growth, declining social mobility, and worsening income inequality.

In recent years, however, America has faced the additional problem of a precipitous decline in its soft power, which Joseph Nye defined as a country’s ability to get others to want what it wants. Today, that soft-power currency, more valuable than the dollar itself as a source of US hegemony, has been debased beyond recognition. US global leadership is now associated with disastrous wars, repudiation of the collective commitment to address climate change, sabotage of the global trading system, and unraveling international security arrangements.

In addition, America has damaged its own political institutions. It currently has an erratic and unbalanced president, a gerrymandered Congress, a politicized Supreme Court, and a system of rulemaking rigged by the elite. Over the past century, US institutions often inspired awe and invited emulation in much of the world. Now, they have become an object of mockery, while the 2008 global financial crisis similarly tarnished the American model of finance-driven, winner-take-all capitalism.

Moreover, whoever wins the 2020 presidential election will find it hard to restore the luster of US political and economic institutions, owing to America’s deep polarization and entrenchment rather than attenuation of adverse economic trends. This raises increasing doubts about America’s ability to project its power externally.

What about China? If the Chinese economy remains on track, it will challenge US economic supremacy in the medium term. However, the risks of a Chinese economic derailment have increased, as domestic debt has climbed to vertiginous and unsustainable levels while export opportunities have shrunk.

Perhaps most worryingly, Chinese President Xi Jinping has -- bizarrely -- turned away from the private sector-led growth model that served as the country’s transformational golden goose for over four decades. As a result, China’s economic prospects seem far less bright than they did a few years ago.

Because China is an undemocratic and closed society, its hegemonic rise has always been hobbled by a lack of soft power. In an attempt to rectify that deficiency, China launched the Belt and Road Initiative (BRI) to promote the international transfer of its impressive expertise in building infrastructure effectively and expeditiously.

At the same time, China established the Asian Infrastructure Investment Bank to challenge international financial institutions that it (and many other emerging powers) regards as increasingly discredited by outdated governance mechanisms. As if to reinforce that view, the US and Europe have yet again asserted their monopoly on control of the World Bank and International Monetary Fund, respectively, through an undemocratic process that was established 75 years ago. Although there have been no formal objections to the recent changes of leadership at both institutions, this has not gone unnoticed in the rest of the world.

Tragically, however, all of China’s accumulation of soft power is being fatally undermined by its political and strategic turn under Xi. The cult of personality has returned, anti-corruption campaigns often target political opponents, and Chinese actions in Hong Kong and Xinjiang reek of political repression.

Even the BRI risks turning sour as participating governments struggle under the weight of huge Chinese loans. In Gabriel Garcia Marquez’s magical realist novel The Autumn of the Patriarch, the defaulting Caribbean dictator repays his “Gringo” creditors by giving up the sea, piece by emerald-green piece. In the real world, acquiring land, natural resources, and sea lanes could prove China’s undoing as a debt collector.

In short, in the current struggle for global pre-eminence, China is depleting its accumulation of soft power, while America is as well -- and losing its economic strength in the process.

This hegemonic rivalry thus differs sharply from previous historical episodes. From the Athens-Sparta transition to the handover from the United Kingdom to the US in the 20th century, the challenger’s credentials were undeniable. It was as if a young, vigorous boxer were challenging and defeating a flabby, middle-aged opponent.

Today, by contrast, China and America look like two tired boxers who go at each other for 15 grueling rounds, not to determine who will stay upright, but rather to discover who will be the first not to go down. With such wannabe and reigning hegemons, is it any surprise that the world finds itself in a leaderless and rudderless drift?


Arvind Subramanian
Arvind Subramanian, a former chief economic adviser to the government of India, is a non-resident senior fellow at the Peterson Institute for International Economics and a visiting lecturer at Harvard’s Kennedy School of Government. He is the author of “Eclipse: Living in the Shadow of China’s Economic Dominance.” -- Ed.