Taking a bold step in a heavily regulated country in terms of customer information protection and security, traditional banks and financial institutions late last year started what is called an open banking service.

Offering new business opportunities to small-sized financial technology companies with the open access of customer data, the open banking system allows users to check their accounts at any local bank via a single mobile app.

With the new banking system, consumers can now compare and utilize loan and savings products of different banks more conveniently.

The move came amid mounting concerns that banks and financial institutions could be disrupted by emerging fintech companies if they did not respond to rapid changes in the market. Instead of being outpaced by the new players, traditional banking institutions appear to have decided to become a disruptive force themselves.

“Expectations for the fintech industry are running high with the increasing deployment of new services, including My Data and My Payment, this year,” said a source from the banking industry.

My Data refers to a system that allows users to manage their personal financial information in a single software program. My Payment enables nonbanking fintech startups to offer payment services without the need to have customers’ financial assets.

Tech-savvy firms like Viva Republica, a fintech unicorn and the operator of money transfer app Toss, and tech giant Naver are likely to up the ante in the competition this year.

The new funding came after Viva Republica received the green light from the Financial Services Commission to launch the nation’s third internet-only bank in early December -- seven months after its first application was rejected.

With the investment, the fintech unicorn will likely roll out new loan, or even stock trading, services.

“The planned launch of Toss Bank will surely heat up the competition with the existing online banks, Kakao Bank and K bank,” said Lee Dong-yoon, an analyst from KB Securities, adding the short-term impact in the overall market could be limited, as there is still a year left before the bank launches. 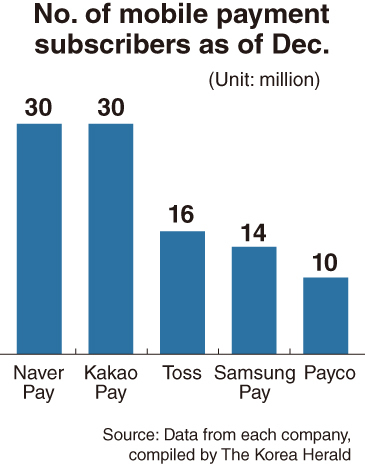 Some market analysts also warned that traditional banks will have to brace themselves for the impact of the arrival of Toss in the banking industry, as they could lose customers to their online competitor.

Web portal giant Naver is preparing to flex its technology muscles in the fintech segment this year as well. Joining forces with Softbank, Naver is scheduled to establish Z Holdings this year, a holdings firm that will have mobile messenger firm Line and web portal operator Yahoo Japan under its wing. The two partners will each have 50 percent of the holdings company.

While a range of new services are expected to launch through the partnership, the partners’ payment services, among others, will likely gain growth momentum based on Naver and Yahoo’s huge user bases, which reach 2.3 billion, mostly in Asia.

Korean mobile payment services providers, including Kakao and NHN, are also going beyond their comfort zones in Korea, eyeing bigger opportunities in global markets. Mobile messenger firm Kakao has launched its mobile payment solution KakaoPay in Japan and Macao, allowing users to pay for their offline purchases in the local markets with the mobile app. While NHN, which runs mobile payment app Payco, is trying to infiltrate Asian markets, including Japan and Taiwan, and North American markets.

“Payco boasts the largest number of offline business partners, including restaurants and stores, in Korea. Based on its presence and tech capability in the local market, the company will try to bring cross-border fintech services to other nations,” an NHN spokesperson said.

Consumer transactions generated from card and electronic payments in the Asia-Pacific region are forecast to double from $18.7 trillion in 2018 to $39.4 trillion in 2024, according to global market research firm Euromonitor International’s report published in November. 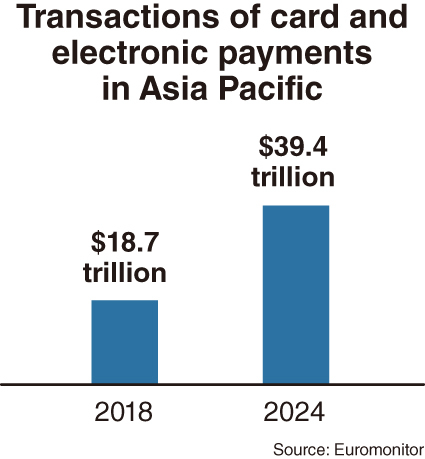 KB Financial Group and Shinhan Financial Group have recently partnered with US accelerator Plug&Play to help nurture and bring fledgling fintech firms to global markets. The startup accelerator, which runs startup support programs, has more than 10,000 startups and 300 official corporate partners. Unicorns like PayPal and Dropbox had participated in the accelerator’s programs.