The upcoming film “The Man Standing Next” goes back to the darkest period of South Korea’s democracy, actor Lee Byung-hun said at a group interview in Seoul on Friday.

Directed by Woo Min-ho, the movie concerns itself with the assassination of President Park Chung-hee on Oct. 26, 1979, by one of his closest aides. Park, previously an Army general, seized power in a 1961 military coup.

Based on the nonfiction work “Directors of Namsan” by former Dong-a Ilbo reporter Kim Choong-sik, who wrote a series of articles on the subject in the early 1990s, the film’s Korean title is the same as the book’s title. Namsan is where the Korean Central Intelligence Agency -- today’s National Intelligence Service -- was located, and it represented the brutal power of the authoritarian regime.


In the film, Lee takes on the role of Kim Kyu-pyeong, a fictional character based on Kim Jae-gyu, the KCIA director and Park’s right-hand man, who fatally shot the president.

Although the assassination has been the subject of multiple productions, Lee said “The Man Standing Next” is different in that it focuses not on the event’s political significance but on the human side of the story -- the relationships between the characters and the changing dynamics between them.

The movie centers on the period when longtime dictator Park became obsessed with the loyalty of his staff.

As Kim Jae-gyu remains a controversial figure, Lee Byung-hun said he tried to stick to the script as much as possible so that he would not alter the audience’s understanding of the real-life assassin.

“The public’s opinion on whether Kim acted for the good of society or out of his personal feelings (against the president) is still very controversial, and the director and I wanted to make sure that this fact does not change even when people leave the cinema after watching the film,” he said. 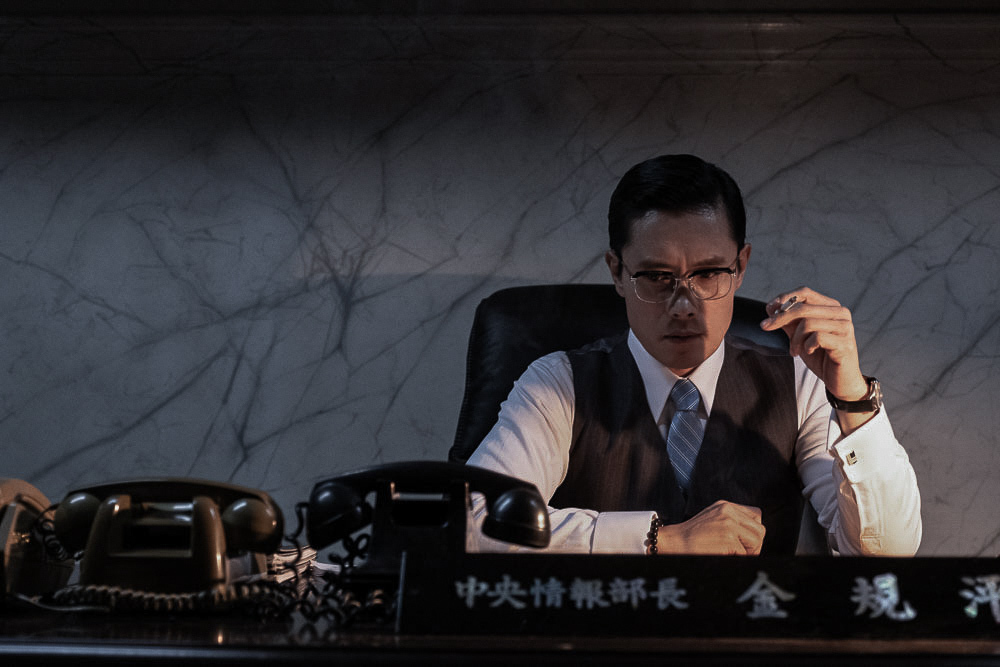 "The Man Standing Next" (Showbox)
To that end, Lee invested much time and effort in studying historical documents and other information about the incident, trying to get into character by understanding the assassin’s motives.

In the movie, Lee’s emotions and words are restrained, reflecting Kim Kyu-pyeong’s psychology -- close to madness -- in his facial expressions and behavior.

The conflict peaks when Kim is about to kill the president.

“In the scene, like anyone else in his shoes, Kim is not in his right mind, and I wanted the audience to be captivated by his madness,” Lee said. “I tried to show the momentary few seconds when Kim comes back to reality in order to maximize the confusion and delusion that he is going through.”

While it was his first time working with the three other lead actors, Lee said the harmony among the four of them was nearly perfect.

“Since the actors are all very accomplished, I was nervous. But, at the same time, I came to anticipate how the synergy among us would be shown on the screen,” Lee said.

During a press conference held Wednesday after the premiere of the movie, the director said “The Man Standing Next” completes his “trilogy of desire,” which began with “Inside Men” in 2015, followed by “The Drug King” starring Song Kang-ho and Bae Doona in 2018. Lee Byung-hun also starred in “Inside Men.”

Unlike Woo’s two previous desire flicks, which were both compounds of explosive emotions and actions, the upcoming movie more delicately and temperately illustrates the insanity of powerful men in the face of broken ambitions and doubts.

Lee Sung-min’s portrayal of President Park’s breakdown after years of obsessing about maintaining his regime is another personification of desire that Woo emphasizes in the last part of his trilogy.

“When I first came across the novel, I was shocked by the story and overwhelmed by the author’s journalistic expertise,” Woo said. “It was remarkable how Kim did not lose his patience and delved into the incident, making acute judgments, and I tried to relive this attitude as a journalist in the film.

“The movie does not hold any political implications or color and it does not evaluate the rights and wrongs committed by specific figures,” Woo said for anyone concerned about the political impact the movie may have, especially as it comes to the screens less than three months ahead of the general elections.

“It’s up to the viewers to think about why the director of the KCIA killed the president,” he said.

“The Man Standing Next” will open in local theaters Jan. 22.