Eyes on KCGI, Bando Construction, Kakao to see if they back Cho Won-tae or Cho Hyun-ah

With tension brewing over the holding firm’s leadership, the March meeting is an important one for Hanjin Group Chairman Cho Won-tae, who assumed the top post in April last year after his father died of chronic lung disease. Shareholders will vote on whether to reappoint Cho as executive director of Hanjin KAL.

Cho is also the president and CEO of Korean Air, the group’s main cash cow.

For Cho to remain in his role at Korean Air after his tenure expires March 23, he needs at least 38 percent of all votes based on the 77.18 percent attendance rate at the previous shareholders meeting.

Together with family members and executives in control of affiliated companies, as well as Delta Air Lines, which holds a 10 percent stake in Hanjin KAL and is a known supporter of Cho Won-tae, the current chairman’s support base could account for almost 40 percent of Hanjin KAL shares.

But this scenario is not likely, according to industry watchers.

On Dec. 23, former Korean Air Vice President Cho Hyun-ah publicly accused her brother of failing to heed their late father’s wishes and ensure the “harmonious, joint management” of the company.

The same week, media outlets reported that Cho Won-tae visited his mother on Christmas Day and a fight ensued over unspecified differences.

Cho Hyun-ah, the infamous “nut rage” heiress, stepped back from management in 2018 after she and her sister found themselves at the center of a series of power abuse scandals.

In Hanjin KAL’s latest executive reshuffle in November, it was highly anticipated that Hyun-ah would return to take control of the KAL Hotel Network, but she was not on the list.

In a statement released to reporters via a law firm in December, Hyun-ah said, “Cho Won-tae’s business management of Hanjin Group is different from the late chairman’s instructions for harmonious, joint management.” He “continues to delay and insincerely respond to family discussions,” she added.

She also said she would seek to resolve the issue by consulting with shareholders.

Hanjin Group immediately released its own statement, saying the latest development should not negatively impact the group’s plans to normalize business.

Rumors have circulated since last year that Hyun-ah and Won-tae are in a dispute over succession plans, including who should inherit their father’s shares.

Some market insiders have suggested Hyun-ah has formed an alliance with her younger sister and their mother against her brother, giving her team a combined stake of 18.27 percent -- slightly more than the Won-tae-Delta team, which owns 16.52 percent altogether.

If so, the decision is in the hands of the holding entity’s largest shareholder, Korea Corporate Governance Improvement, and its No. 3 shareholder, Bando Construction.

Earlier this month, Hyun-ah reportedly met with the KCGI chief and officials from Bando ahead of a shareholders meeting, possibly about cooperating to oppose her brother’s reappointment.

Combined, the KCGI and Bando shares amount to a 31.98 percent stake in the company. 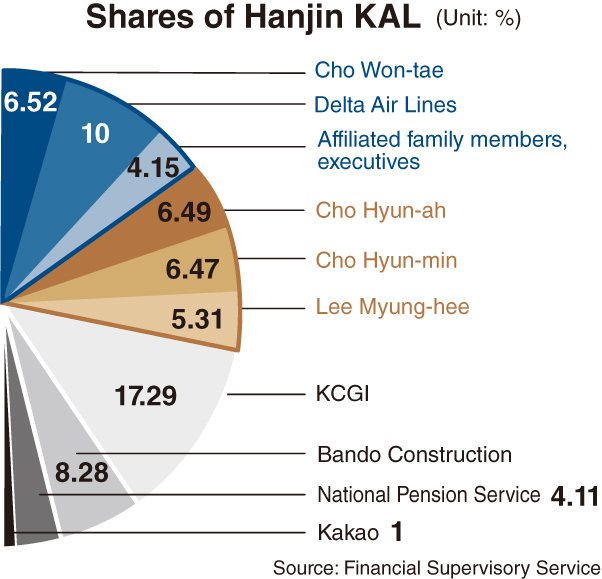 But industry insiders liken such an alliance to a poisoned chalice, since each individual member of the owner family holds a stake in the company of only about 5-6 percent, which would give KCGI the upper hand in governance.

KCGI has become increasingly vocal in its initiatives to improve governance in recent years, having gradually upped its shares in Hanjin KAL last year from 15.98 percent to the current 17.29 percent. The activist fund has also consistently called on Hanjin KAL to sell off its hotel business to effectively reduce its 800 percent debt ratio. The hotel industry is Hyun-ah’s main area of expertise.

Kakao said the acquisition was in line with a memorandum of understanding it inked with Hanjin KAL on Dec. 5, resolving to collaborate in areas including membership, fintech, commerce and content.

On the day it was signed, Korean Air explained that the memorandum reflected Chairman Cho Won-tae’s determination to reinforce the IT aspects of the business, which led to market speculation that Kakao may be among his allies.

The app operator has not commented on whether it plans to exercise its voting rights or buy an additional stake.

Family wars over control of the company are nothing new for Hanjin KAL.

After Hanjin Group founder and then-Chairman Cho Choong-hoon passed away in 2002, his eldest son, Cho Yang-ho, succeeded him in accordance with the terms of his will.

But the founder’s second son, Nam-ho, and his fourth son, Chung-ho, sued Yang-ho, accusing him of misrepresenting their father’s dying wishes.

GS Group was created in an amicable divorce with LG Group in 2004 under an agreement among members of the conglomerate’s founding family. But market insiders say they doubt the Cho siblings will take the same path.

They say it is risky to separate affiliates and that Hanjin Group is nothing without its main cash cow, Korean Air.

“It is physically difficult for Hanjin Group to separate its subsidiaries, not only because the owner family mutually owns some stakes in each company, but also the group’s other arms such as its hotel, tourism and leisure businesses are closely related to Korean Air,” said professor of business Kim Kang-sik from Korea Aerospace University, adding that the separation of Hanjin Group’s affiliated companies would neither be profitable nor promising.