A 73-year-old man, the 13th casualty from the coronavirus, died while waiting to be hospitalized after having tested positive Tuesday, raising alarm that a shortage of hospital beds could lead to more deaths.

Daegu Mayor Kwon Young-jin called for voluntary work from doctors and nurses as 64 percent of the cases in Korea were reported in the fourth-largest city as of Thursday afternoon.

The city secured some 1,013 hospital beds as of Thursday. Out of 1,017 confirmed patients, 447 had been hospitalized, some 100 were to be admitted to hospitals within the day and others were waiting to be hospitalized while under self-isolation, according to the municipality.

Korea saw the number of cases climb by 505 to 1,766 Thursday afternoon, with most cases traced to a unit of Shincheonji Church of Jesus in Daegu and Cheongdo Daenam Hospital in Cheongdo, North Gyeongsang Province, according to the Korea Centers for Disease Control and Prevention. 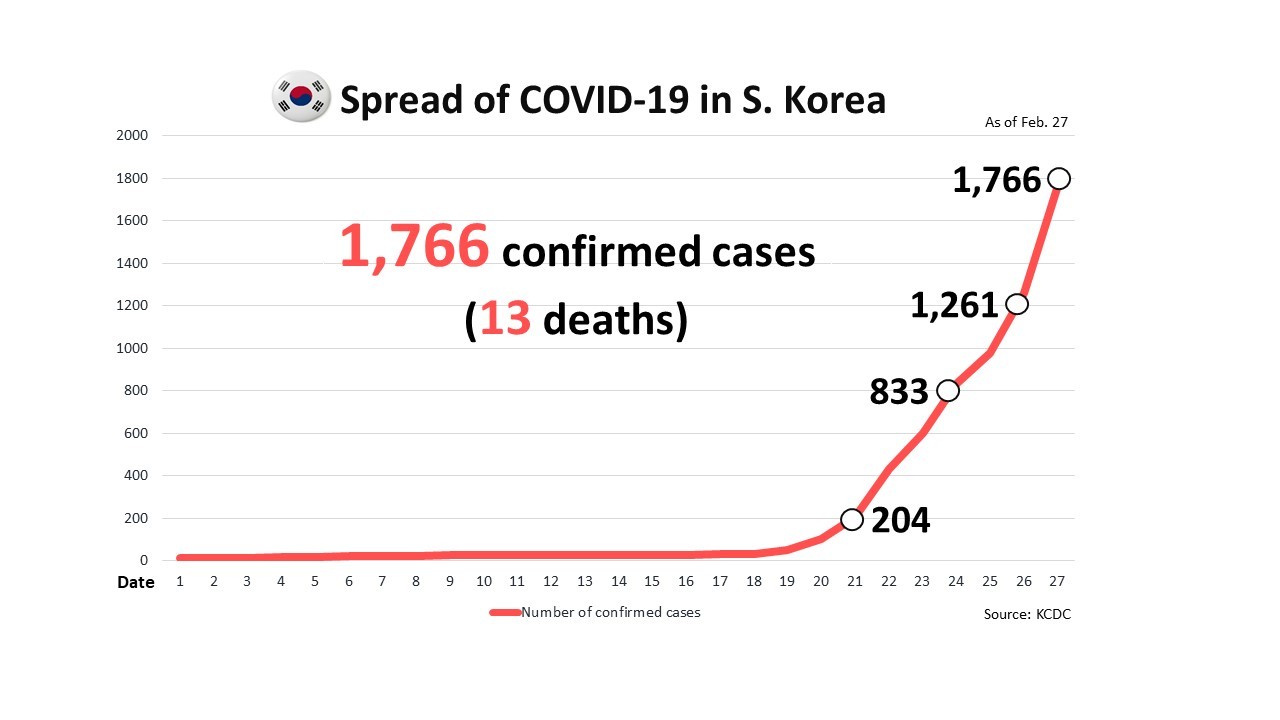 It is the largest jump in one day for the country since the outbreak began in late January.

“In the case of Daegu, it is true that it takes a considerable amount of time (for confirmed patients) to be assigned to hospital beds in accordance of severity (of symptoms),” Vice Health and Welfare Minister Kim Gang-lip said at a regular briefing.

Health authorities are setting up a system to more promptly classify patients according to the severity of their symptoms and assign hospital beds, he added.

The government is focusing efforts on containing the spread from a few big clusters and mitigating the impact of the coronavirus.

While virus tests for some 212,000 members of the Shincheonji Church of Jesus are underway, the KCDC said it had asked for an additional list of an estimated 70,000 people training to become members of Shincheonji.

In North Gyeongsang Province, all remaining 60 patients at Cheongdo Daenam Hospital were to be transferred to the National Center for Mental Health for treatment by Friday. At the hospital alone, 114 cases were confirmed. Seven out of 13 casualties were linked to the hospital, with critics taking issue with its poor conditions, lack of equipment and professional personnel.

In Seoul, containment efforts are focused on the city’s biggest hotbed of infections -- Eunpyeong St. Mary’s Hospital, where 11 cases were confirmed since the first case was reported Jan. 21. The infection route for the first case remains unidentified, sparking worries about possible cases being undetected.

Meanwhile, no genetic mutation has been confirmed in the coronavirus outbreak so far, after an interim analysis of six genes from the virus, according to the KCDC. This indicates little likelihood of sudden changes in toxicity and errors in DNA tests.

With some 42 countries imposing restrictions on the entry of Korean nationals, the government said it is making diplomatic efforts for such “excessive” measures to be withdrawn.

The government reiterated it is not considering expanding an entry ban on other countries, saying the focus would be on mitigating the impact of community transmission in Korea. The nation has barred entry of those coming from Hubei province in China, the epicenter of the coronavirus outbreak.

The surge in infections led the South Korean and US militaries to delay annual joint military drills on the Korean Peninsula.

More than 81,700 cases have been reported in every continent except Antarctica, pushing the world closer to a pandemic. Italy and Iran have emerged as major clusters outside of China, with more than 400 and 140 cases confirmed, respectively.