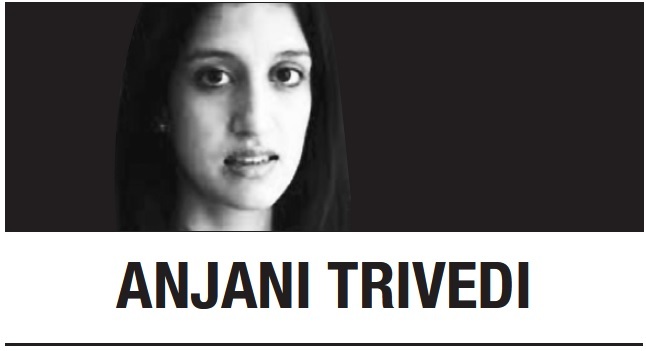 Pummeled by the coronavirus, China Inc. now faces another disruption: a global shortage of dollars.

Chinese companies are looking at $120 billion of debt repayments this year on their US dollar denominated debt. Real estate developers and industrial companies make up three-quarters of the outstanding $233 billion of junk-rated bonds. There’s another $563 billion of higher-rated debt. The question isn’t just whether they’ll be able to pay their debt. It’s worth wondering how they can access the needed dollars -- and at what cost.

Globally convulsing markets have put a strain on US dollar funding. In China, signs of tightness in dollar liquidity are emerging, based on three-month interbank overnight rates and other indicators. Banks are trying to beef up dollar cash positions. Meanwhile, yields on big chunks of Chinese debt have shot to over 15 percent as investors unload, increasing the cost of borrowing and refinancing.

Hedge funds and other asset managers that bought up junk-rated Chinese dollar debt are unwinding those positions. In times like these, investors aren’t discriminating. The pain will persist: Credit markets don’t reprice risk as quickly as equity markets.

Debtors need dollars now. These companies have typically resorted to raising more debt to refinance the old. They won’t be able to continue like this. Not only has it gotten prohibitively expensive, it’s hard to find buyers at this point.

Take real estate developers. They make up around 60 percent of the outstanding bonds and primarily rely on onshore yuan revenue from advanced payments and deposits on purchases. With sales down sharply, that cash is waning and swapping it to dollars costs more. Further, regulations restrict raising debt for refinancing. This month, developers have around $4 billion coming due, with smaller repayments until November, when $6.7 billion must be repaid. That comes as companies across emerging markets are staring at $19 trillion in maturities of dollar and local currency loans and bonds over the course of 2020.

Defaults have been ticking up as Beijing goes into forbearance mode. Estimates from the Institute of International Finance suggest that companies with majority state ownership comprise over 35 percent of nonfinancial firms’ debt in China. Add in those with any government backing, and it’s more than 80 percent. Will Beijing step in for all? Unlikely, but it’s still on the hook for a significant chunk. While onshore investors are agreeing to extend payment terms and to exchange debt for equity, holders of foreign bonds are unlikely to be so forgiving.

Tapping Chinese banks for funds isn’t straightforward. They don’t have dollars to hand out en masse. Of the $788 billion of total foreign currency deposits held by financial institutions, $377 billion consists of corporate deposits. That’s down from a peak two years ago.

Banks have more than $800 billion of foreign currency loans on their books. Along with the lending for China’s Belt and Road Initiative, the virus-induced economic shock and rising bad debts mean banks will have to be selective.

Investors usually find comfort in the central bank’s war chest of $3.1 trillion in foreign exchange reserves. Sure, it could -- and will -- step in to ease the dollar-funding pressure on banks. But the moment the lender of last resort starts tapping reserves, sentiment will be hit, and then it’s a question of resilience.

In addition, these reserves are held in US Treasuries, agency bonds and the like. Only about $18 billion, or 0.5 percent, is in cash deposits, mostly at commercial banks, according to HSBC Holdings analysts. Selling those as the broader credit market tanks would only drive more market jitters. Unlike many central banks, China’s doesn’t have a swap line with the US Federal Reserve. So how far will the central bank go?

There are other pressure points. The dollar shortage will hit trade credit, crucial for China Inc.’s exports and underlying businesses. In periods of dollar strength and shortage, this leads to outflows as overseas financing to buy Chinese goods dries up. As Rhodium Group’s Logan Wright says, “In the 2008 crisis, this was very severe as trade-credit liabilities were paid down and credit lines were cut.” This time, he says, a dollar shortage in this type of credit would probably lead to “a sharper-than-expected decline in China’s exports” over the next few months. At some point, the credit risk becomes entrenched in balance sheets and coming back is hard. The longer these dislocations last, the worse they get.