[Gregory A. Maniatis] Don’t scapegoat migrants for the pandemic 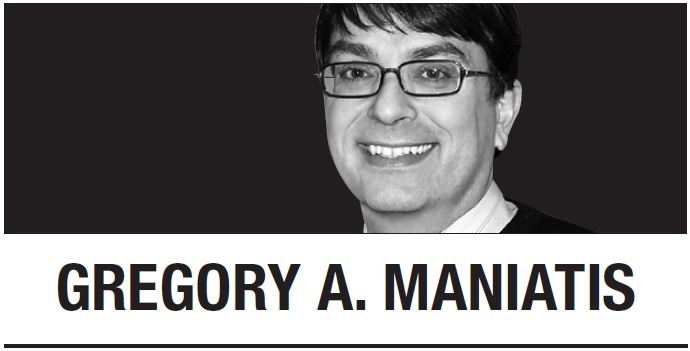 Let’s be clear: COVID-19 initially spread around the world as a result of well-heeled travelers returning home from cruises, foreign skiing holidays, and international conferences. But many wrongly prefer to blame migrants instead -- often with appalling consequences.

For example, Yemeni militias this spring attacked thousands of Ethiopian migrants whom they claimed had brought the coronavirus. Saudi Arabia expelled African migrants en masse, and Chinese landlords evicted Africans from their homes in the city of Guangzhou. The United States, too, regularly deports Central American and Caribbean migrants back to their countries of origin, often after they have been infected in US detention facilities. Malaysia has arrested hundreds of undocumented migrants, including Rohingya refugees, while members of Indian Prime Minister Narendra Modi’s government have unsurprisingly blamed Muslims for bringing the virus to India.

The scapegoating of migrants is a pandemic in itself. It is not only immoral, but it also undermines our ability to control the virus and ignores migrants’ vital role in that effort. Even though many migrants are now formally recognized as essential workers, they (and many minority groups) are suffering disproportionately from COVID-19, with infection rates often double or triple those of other groups -- primarily owing to unsafe and exploitative working conditions.

The millions of migrants toiling on farms and in meatpacking plants are particularly vulnerable to the virus. Some 1,500 workers in a German meat factory -- most of them migrant laborers from Eastern Europe -- were recently diagnosed with COVID-19. In the US, where three-quarters of agricultural workers are foreign-born, outbreaks have been legion. At one poultry company alone, Delmarva, 2,215 workers contracted the virus and 17 died. Migrants -- and particularly women -- also account for an outsize share of other at-risk essential workers, including front-line health-care and home-care personnel, gig drivers, janitors, and cleaners.

Far too often, employers fail to provide migrant workers with sufficient personal protective equipment or access to health care. And migrants who fall ill cannot afford to take time off work, because they are excluded from receiving emergency assistance such as wage subsidies and unemployment benefits.

Many migrants therefore face the impossible choice of disobeying lockdown restrictions or watching their families go hungry. Moreover, language barriers often prevent them from accessing critical information, while being forced to live in cramped spaces puts them at greater risk of infection (as is also true in crowded refugee camps). Worse still, US enforcement agents are even entering hospitals in pursuit of migrants to deport -- a tactic that deters many from seeking medical care.

Fostering a climate of deprivation and fear among migrants will serve only to prolong the pandemic and extend the human and economic suffering that come with it. To avoid this scenario, governments urgently need to adopt policies that promote inclusion.

Encouragingly, some are already doing this. During the early stages of the pandemic in March, Portugal ensured that its migrant workers had access to health care and other public services; Italy soon followed suit, albeit in a more limited fashion. In addition, several countries have ended or sharply curtailed the detention of migrants, and on June 26, a US federal judge ordered the release of migrant children being held with their parents in three federal detention centers.

Other countries have gone further, recognizing that migrants and refugees are an untapped resource. Ireland, Germany, France, the United Kingdom, Spain, Australia, Colombia, Chile, and Argentina have fast-tracked authorizations for trained health-care workers, many of whom are refugees awaiting asylum decisions. Thailand and Spain offer migrants full access to health care regardless of their immigration status. And even under President Donald Trump, the US Department of Homeland Security has issued undocumented immigrants letters noting their “critical” role.

Inclusive policies like these not only recognize the essential roles migrants are playing during the pandemic, but also set the stage for a faster, more robust economic recovery. By contrast, Singapore, which failed to include migrant workers in its pandemic response, subsequently suffered a second wave of the virus.

Ending the pandemic sooner rather than later will require policymakers to learn as they go from the experiences of their own countries and others. Already, it is clear that governments should take five essential steps.

First, they should regularize migrants, if only temporarily, thus allowing them to access health care, housing, social services, and emergency aid without fear of arrest, deportation, or crippling bills. Policymakers should also pay particular attention to the needs of women migrants, who face increased risks of violence during lockdowns and quarantines.

Second, public health authorities need to enlist migrant communities in the process of contact tracing, which will be key to controlling the virus until an effective vaccine emerges. To this end, individual health data must be firewalled from immigration enforcement.

Third, governments should reopen national borders to asylum-seekers, just as they are doing for tourists. Violence, droughts, natural disasters, and population displacement have not been on hold during the pandemic, so the 164 countries with measures in place that have restricted access to asylum in some way need to lift those curbs, as Uganda has done.

A fourth priority is to ensure that migrants have fair access to a COVID-19 vaccine once one becomes available. Given how many migrants perform essential, public-facing jobs, they should be vaccinated early, even if they are undocumented.

Finally, governments must release migrants from detention. Such facilities are a breeding ground for disease and are also outrageously expensive, costing states some $200 per night, compared to about $10 per night for alternatives.

Far from being one-time measures, these steps should mark the start of deeper structural changes in migration policy. The pandemic has revealed not only the vital contribution that millions of documented and undocumented migrants make to our communities and economies, but also the fact that we are all in this crisis together. How we treat or mistreat the most marginalized populations will therefore determine the fate of our societies.