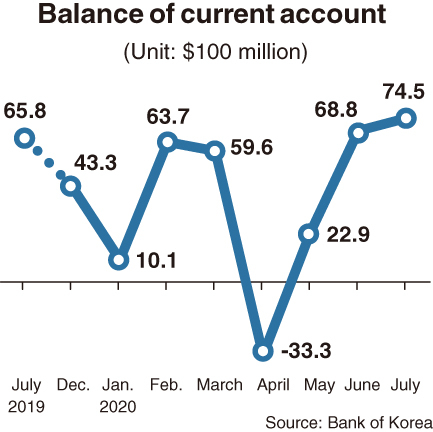 South Korea‘s current account surplus increased to a nine-month high in July as exports fell at a slower pace than imports as major economies started to resume trades after the pandemic lockdowns, according to data by the Bank of Korea.

The current account surplus reached $7.45 billion in July, up from $6.88 billion the previous month. The figure was the largest surplus since October 2019, when the country posted a surplus of $7.83 billion.

Korea achieved the surplus for the third straight month in July after logging a deficit of $3.33 billion in April due to faltered exports amid the new coronavirus outbreak.

In the first half of 2020, the current account surplus marked the smallest in eight years as overseas shipments were hit by the virus outbreak.